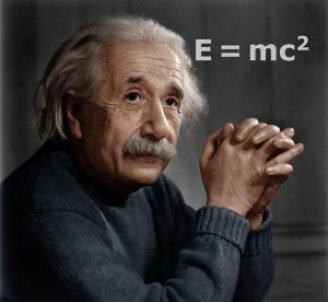 Over a century after Albert Einstein predicted the phenomenon of gravity waves, a group of physicists won the 2017 Nobel Prize in Physics for finally confirming that these waves existed. Clearly, Einstein’s theories continue to spur on scientific inquiries into the world around us. And while Einstein’s discoveries might be best known for elucidating the theoretical nature of the universe (e.g., his theory of relativity), they have also laid the foundation for modern scientists to understand the inner workings of cells, the building blocks of life.

Perhaps Einstein’s greatest contributions to cellular biology was his explanation of diffusion (i.e., why a solid particle suspended in still water moves about randomly instead of remaining stationary). According to Einstein’s theory, diffusion occurs when water molecules—which are constantly in motion—collide randomly with these suspended particles, and the average speed of this random motion is directly related to the particle’s size and temperature.

Today, scientists regularly use these principles to determine the size of large molecules, called ‘polymers’, by measuring its speed of diffusion in a water solution. Researchers also study the diffusion of polymers (including proteins) in cells to learn about these molecules’ cellular functions. This is important work, as the speed of diffusion and the distribution of polymers can affect thousands of chemical reactions going on within a cell at any moment.

Despite the fact that the movements of polymers are fundamental to how cells work, there are gaps in the scientific understanding of the differences between simple unhindered diffusion and diffusion in a crowded intracellular environment. Indeed, living cells are jam-packed with a complex mixture of thousands of different molecules, all of which have their own unique characteristics.

In fact, polymers act somewhat like people in a crowded environment. For instance, in a packed room or brimming subway car, people generally slow down and try to occupy less space by keeping their arms and belongings closer to their torsos. Similarly, research has shown that proteins also slow down and draw in their limb-like parts when inside a crowded cell.

Thus, in a real-life cellular environment, trying to determine a polymer’s actual size (and therefore its diffusion behaviour) is more complicated than in a water solution. Indeed, “Because crowding affects both the size and the speed of proteins, one can no longer measure only its speed to determine its size,” says Professor Anand Yethiraj, a physicist at Memorial University. Unfortunately, many of the scientific techniques that are used to study diffusion today, including those based on Nuclear Magnetic Resonance (NMR) and rheometry, cannot give the full picture of what’s happening inside a cell because they rely too heavily on measuring the speed to determine the size.

Therefore, to get a better understanding of what’s actually happening inside living cells, Yethiraj is building model systems of relatively simple yet crowded cell-like environments. To test the validity of his model systems, however, Yethiraj had to find a way to accurately determine the size of polymers in a solution—and to do so, he turned to neutron beams. 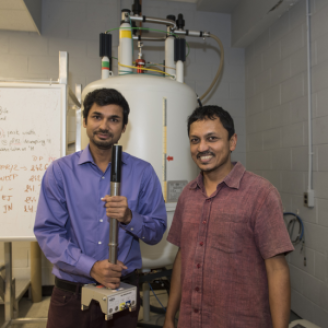 In collaboration with physicists from the University of Wisconsin and Oak Ridge National Laboratory (ORNL) in the U.S., Yethiraj and graduate student Swomitra Palit demonstrated that neutron beams can indeed be used to obtain independent size measurements of polymers in crowded solutions. To get these measurements, they travelled to ORNL to use a specialized technique called ‘small-angle neutron scattering’ (SANS), which is currently unavailable in Canada (although a SANS beamline is presently being built at the McMaster Nuclear Reactor and should be completed in 2019).

Yethiraj and Palit then combined their measurements from the neutron beam experiments with NMR and rheometry data for the same crowded solution. This combination of results enabled the researchers to begin to unravel the intertwined relationships between how crowded a solution is, how large the crowding molecules are, how compressed the polymers become, and how greatly the speed of diffusion is affected.These combined results could then be meaningfully compared to computer simulations of Yethiraj’s model system, confirming multiple aspects of the model while also revealing some areas where the simulations failed to predict the observed behaviours. This powerful demonstration of combined approaches was so compelling that it warranted publication in the prestigious physics journal Physical Review Letters in March 2017 (doi:10.1103/PhysRevLett.118.097801).

After this initial demonstration, Yethiraj’s team began to apply these same methods to model systems that were progressively more complex and more closely related to living systems. For instance, while their first experiment used electrically neutral crowding molecules in the solution, the researchers used electrically charged crowding molecules in their follow-up experiments. Interestingly, they found that the electrical charge caused a small yet significant increase in the polymers’ speed.

The researchers then determined the speed of the polymers’ movement in a more biologically relevant medium: the fluid removed from bacteria. Notably, they found that the speed of the polymers in the bacterial fluid was faster than the speed they observed using the neutral crowding molecules, yet slower than the speed when the charged molecules were used. This suggested that the use of both charged and uncharged crowding molecules would enable the researchers to mimic organic fluid in their non-biological model systems. These findings were published in September 2017 (doi:10.1063/1.4986353).

Yethiraj is eager to conduct further follow-up experiments, but he needs more time on a SANS beamline. “Getting beam time at U.S. facilities is difficult,” he explains. “We only get about half the time we need on SANS beamlines because there’s much more demand for SANS than there is supply.” Still, his research team has no choice but to keep applying for the time, since the size measurements that neutrons provide can’t be obtained any other way.

In the meantime, Yethiraj and his team of physicists are using their successes to build collaborations with scientists who specialize in cellular systems research. In this way, Yethiraj hopes to apply the knowledge that can be gained by his model systems towards generating more insight into the inner workings of living cells.