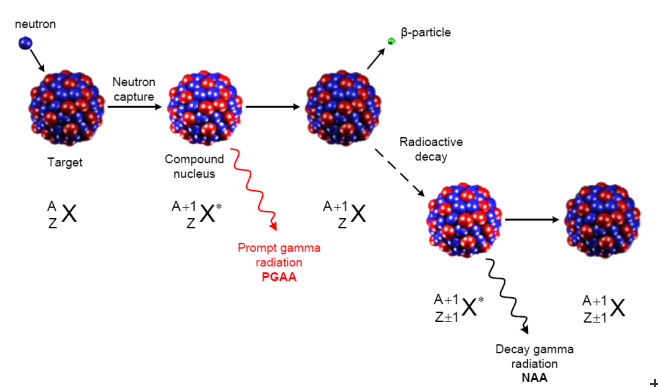 Neutrons have no charge; thus they can interact with the atomic nuclei at any energy. Several neutron-induced nuclear reactions are used for chemical analysis, as they produce gamma radiation or charged particles. These radiations are characteristic, i.e. their energies identify the emitter nuclide and their intensities are proportional to the amount of the nuclide. Slow (cold and thermal) neutrons have the highest cross sections for being captured in atomic nuclei, hence this is the most important reaction used in nuclear analytics. Whenever a nucleus absorbs a neutron, its binding energy is released typically in the form of prompt gamma radiation. In the case of certain light nuclides (10B, 7Li, 14N), α particles or protons are emitted, sometimes together with gamma photons. After the de-excitation, the nucleus reaches its ground state. If it is radioactive, a β particle will be emitted followed by γ radiation with a given half-life. These delayed gamma rays are also characteristic, so they can be used in analysis, too, see Fig.1.

Almost all nuclides emit prompt gamma radiation, so their detection allows for the panoramic analysis of samples. When performing PGAA, the irradiation and the counting takes place at the same time. The most developed facilities use guided cold neutron beams from research reactors. The instrument has a double shielding: against neutrons and gamma rays to ensure that mainly the radiation from the samples reaches the gamma-ray detector. PGAA is especially useful for the determination of light elements, for which not many analytical techniques are available. It is a unique method for the analysis of hydrogen whose detection limit can be as low as a few ppm in certain matrices, at the same time hydrogenous material, like water solutions can also be investigated for their pollutants. Light elements have no high cross section, however as main components they can be determined with a high accuracy. Hence, PGAA is highly useful in the analysis of the matrix composition of most naturally occurring samples (rocks and minerals, organic or biological materials, construction materials glasses etc.). The technique is non-destructive, it needs no sample preparation, hence it is unique in the investigation of precious samples, archeological objects etc. At the same time, it is highly sensitive for certain elements (like boron, cadmium, a series of rare-earths) which can be determined on the ppb level. The measurement typically last a couple of hours, sample masses are typically 10 mg–1 g. The complicated gamma spectra need a laborious evaluation.

In the case of NAA, the irradiation takes place in a high-flux neutron field: in a nuclear reactor, or in a strong neutron beam. After the irradiation, the sample is transferred to a low-background counting station where the radioactivity of the activated sample is determined. Light elements cannot be activated considerably. Certain elements in third period of the Periodic Table (e.g. Na) produce strong delayed gamma radiation, while others have low cross sections, or short half-lives (Mg, Al, Si, Cl), so their investigation is challenging. Reasonable activity is produced for most the elements from the fourth period only. Hence, NAA has proven to be useful in the analysis of heavier elements as trace components. NAA and PGAA complement each other in the analysis of typical major and trace elements. In the usual procedure, the sample is irradiated for a short time (20–300 sec) to activate the short lived products which are counted immediately (Al, V, Mg etc.). Then the sample is irradiated for as long as 24 hours when the long-lived nuclides (e.g. Fe) are activated. The sample is then cooled to let the shorter-lived components to decay away, and then it is counted for several hours typically in a close counting geometry. NAA is highly sensitive for Na, Mn which occur in many natural samples, also for Au and many rare-earths, as well as Co, and Sc. For many elements the detection limits are in the range of ppb. Sample masses range usually 1–100mg. When combined with radiochemical separation, the sensitivities can be further improved (radiochemical NAA, RNAA).

All nuclear reactions used for the generation of neutrons produce fast neutrons. When they are not moderated, other nuclear reactions can also be induced which also produce characteristic radiation. The most typical reaction in 100 keV–2 MeV energy region is the inelastic neutron scattering, when the lower energy levels of the nuclei are excited, and then de-excited with the emission with gamma photons. This interaction has similar cross sections for all the nuclides, so the elemental sensitivities are similar when activating in a pure fast neutron beam. Other reactions with the emission of protons, α particles, etc. are also possible. In these reactions sometimes radioactive, typically short-lived nuclides are formed which can be detected after the irradiation. That is how oxygen can be measured using 14-MeV neutrons. Neutron generators, or isotopic neutron sources have been used for these purposes, however, fast neutron beams from reactors can also be used for this purpose. Typical sample masses are grams, and the measurements take several hours.
Many generator-based systems use moderators, too. These instruments are mainly applied in the industry (on-line analyzers and bore-hole logging). Since the fluence of these neutrons sources are far from that of reactors, they can be used for the analysis large samples: 1–100kg. These facilities are successfully applied for monitoring large waste tanks.

In a condensed medium, charged particles lose their energies gradually along an almost linear flight path within 5–50 microns. We use this phenomenon in NDP. The sample is irradiated with neutrons uniformly, and the charged particles emitted by certain light nuclides (most typically 10B, 7Li) loose from their energies as a function of their depths below the surface. Thus, from the energy spectrum we can reconstruct the concentration profile of these elements. The technique is used for the investigation of thin films. It can also be used for the study of dynamic processes in surface layers. The most typical application these days is the monitoring of lithium concentration profiles in lithium-ion batteries even in operando.