VIP visit at the FRM II 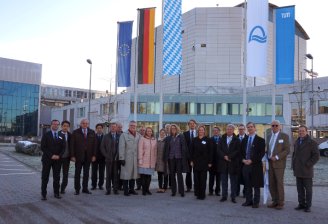 The high ranking government representatives from the United States, Canada, Japan and Europe were accompanied by Ms. Susanne Baumann, deputy commissioner for arms control and disarmament of the German Government.

Their tour included the nuclear installations and the scientific instruments. The guests were very much impressed by the scientific potential of the neutron source and they also discussed about the conversion to high density fuels with lower enrichment.