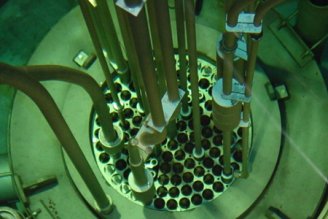 Reactor Triga Puspati (RTP) the only nuclear research reactor in Malaysia. It came into operation in 1982 and reached its first criticality on 28 June 1982. TRIGA stands for Training, Research, Isotope Production and General Atomic. RTP is a pool type reactor, where the reactor core sits at the bottom of a 7-metre high aluminium tank and this is surrounded by a biological shield made of high density concrete. The reactor uses solid fuel elements in which the zirconium-hydride moderator is homogeneously combined with enriched uranium. Demineralised water acts both as coolant and neutron moderator, while graphite acts as a reflector.