10 years ago: the first user at the FRM II

The first external user was Klaus Habicht of the Helmholtz Centre Berlin, who carried out experiments on the instrument TRISP on May 4, 2005. 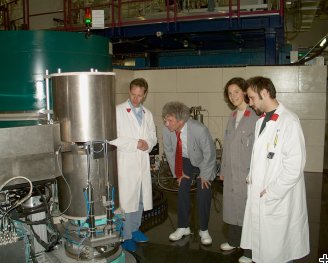 On April 29, 2005, user operation at the FRM II was officially launched. The first neutrons from the “Atomic egg” successor already existed on March 2 the year before, but between the first criticality and a regular routine is a long way, peppered with numerous tests and repeated starting and stopping of the reactor. However, some instruments could be taken in operation with neutrons already in the second half of this first cycle. Burkhard Schillinger was among the first, whose instrument was already ready and able to deliver results immediately. With the second cycle on 29 April 2005 the regular user operation began on the instruments that were already in operation at the time, among other things, Stress-Spec, TRISP, MIRA, and RESI.

Klaus Habicht examined at that time 10 years ago the phonon life time in superconducting niobium and later also in lead. Thomas Keller was already in charge of investigations at TRISP and recalls: “For this experiment, we have adjusted a very long time, but on May 4, the time had come. From these first results even two publications have emerged, in Phys. Rev. Lett. and in Science Klaus Habicht’s experiment is followed by some 10 000 more of external users since May 4, 2005, which are for traveling from all over the world to the FRM II.