A reliable type from the 1980s

The source of the proton beam at PSI is a retro-style Cockcroft-Walton linear accelerator. Since 1984 it has been the first acceleration stage for protons which are taken up to around 80 percent of the speed of light by two further ring accelerators. This has resulted in the generation of a significant proton beam over decades, and which has even held the world record as the highest performing beam since 1994 thanks to ongoing retrofitting. 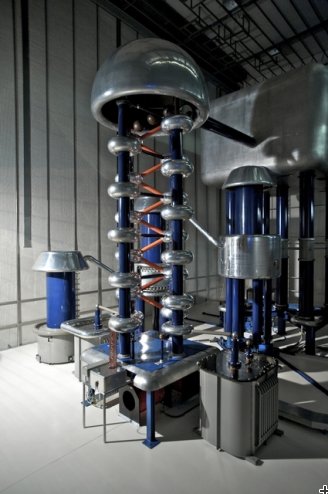 A loud, painfully high siren goes off. It doesn’t seem to bother Joachim Grillenberger. «The molecular pumps for the vacuum», he casually explains. The tall, almost lanky physicist must be used to the noise. Ten years ago Grillenberger abandoned his research on semi-conductors. Since then he has been section head and co-ordinator of the proton facility, and regularly welcomes school pupils and other groups to the reception area of the Cockcroft-Walton.

The Cockcroft-Walton at PSI is a thirty-year-old linear accelerator and, with a little bit of imagination, you could also describe it as lanky. It stands behind a glass wall in its own hall and towers up like a mixture of an observation tower and a prop in an old science fiction film: shiny silver, doughnut-shaped condensers are interlinked by a zigzag of orange, rod-shaped diodes.

These diodes constitute a one-way street for the charge accumulation which only leads upwards, explains Grillenberger. Each of the orange rods consists of around 200 individual rods on the inside which are soldered together. This creates a voltage cascade. A higher voltage is accumulated from condenser to condenser up to the resplendent, extremely positively charged cupula. Or as Grillenberger puts it, «The voltage is pushed step-by-step towards the top.»

The construct is old and solid, and the Cockcroft-Walton is an extremely reliable type, «It almost has an air of something mechanical», comments Grillenberger thoughtfully. For instance, the redundancy resulting from the 200 single diodes for each orange rod means that one or the other can fail in the conglomerate without actually impairing the functioning of the rod. Consequently, only one of these rods has had to be replaced over the last ten years, yet the Cockcroft-Walton designers even anticipated this. Back then, additional rods were manufactured and most of them are still waiting to be used. Today, no-one would be willing to solder together 200 diodes just as a back-up.

The proton facility went into service in 1974. 10 years later in 1984, the Cockcroft-Walton was up. With this step the entire proton accelerator facility went finally into service. This makes it older than PSI. At that time, the facility was still part of the Swiss Institute for Nuclear Physics. 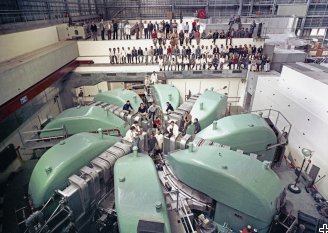 After this historical retrospective you now have to tilt your head back and take a look at the massive, likewise silver, cupula of the Cockcroft-Walton. It is the reservoir for a positive charge. 810 kilovolts are stored here. Just like in every reservoir, this energy is released in a controlled manner.

From the cupula there is a connection to what is known as the cathedral, which just looks like a large silver box from the outside. Inside, and in a cube no bigger than a shoe box is the source of the proton beam contained within a small ceramic pan, roughly the shape of an espresso cup. It contains the hydrogen gas that is irradiated with microwaves. The microwaves strip the electrons from the hydrogen atoms. This leaves the hydrogen atomic nuclei, each of which consists of just one proton.

And now the 810 kilovolts of the Cockcroft-Walton come into play. The protons are exposed to this electric voltage and accelerated. The protons then reach an impressive velocity of 46 million kilometres an hour, or 4 percent of the speed of light. 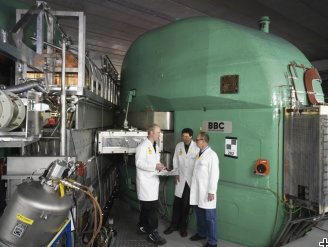 An even bigger magnet Three lofty men beside an even bigger magnet of the ring cyclotron. In the middle is Joachim Grillenberger, and on his right his predecessor Stefan Adam. On the left in the photo is one of the four cavities which accelerate the protons on their circular trajectory.

The Cockcroft-Walton only gives the protons an initial thrust. In the end the PSI proton beam reaches 80 percent of the speed of light. Two further accelerators are responsible for this, each of which are located in their own halls. First a pre-accelerator cyclotron – the injector 2 – which accelerates the protons with a total of 72 megavolts, and finally the heart of the facility: the large ring cyclotron which takes the protons to a voltage of 590 megavolts in total. «In the end the protons are so fast that they could fly six times around the world in only one second», says Grillenberger. This is surely a proton beam worthy of superlatives.

This wasn’t always the case. In its first year, 1974, the accelerator facility had a far lower performance. In particular, the number of protons in the beam has since been gradually and repeatedly increased. This means that today the performance of the proton accelerator is 24 times higher than when it went into service. Already in 1994 the facility chalked up the best performance in the world for an electron beam with very many, very fast protons. Thanks to further retrofittings it has even surpassed its own world record on several occasions since then. The performance of the beam is now 1.3 megawatt but Grillenberger likes to talk in automotive terms: it corresponds to 1750 HP.

The eight magnets in the main accelerator have been there since the very beginning. They are so big that they look like giant, light turquoise dinosaurs besides the scientists. Each one weighs about 250 tonnes, roughly the weight of 50 stegosaurs. In fact, this size comparison only really comes to life in images. When in service, the hall with the ring cyclotron must remain sealed as the atoms that the rapid protons encounter become radioactive. 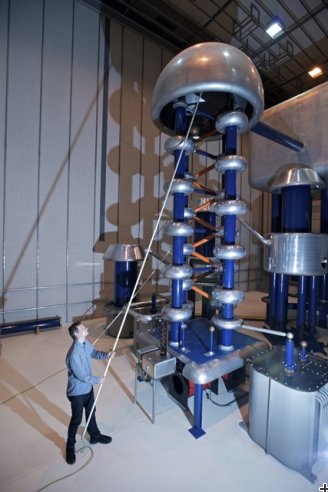 It whips itself up

There are four what are known as cavities between the eight dinosaur magnets. Although the onlooker notices the magnets, they merely serve to keep the fast protons on their circular trajectory. It passes along a horizontal slit through all magnets and cavities. The latter do the actual work. This is where the protons are accelerated. In each of them, i.e. four times per circuit, each proton is given an additional thrust. This is done through alternating voltages, and the proton and voltage must be perfectly matched. It’s like a swing where the next push only makes sense at the inversion point.

But now the protons are getting faster and faster in the ring cyclotron and this can deregulate the thrust. But, here too, the solution is so simple that it could be described as mechanical. The faster a proton flies round in a circle, the larger the centrifugal force it is exposed to. The centrifugal force pulls the particle slightly to the outside of its circular trajectory. Now it has to cover a longer stretch, as if it were on the outer curve. This principle is ongoing. Each proton starts on a small circle and then completes a circular trajectory which gets longer towards the outside in a total of 196 convolutions. Because of the longer trajectory the fast protons remain at the same height as the slower ones – so from above this should look like the spokes of a bicycle – and all particles can then be increasingly accelerated simultaneously using the same alternating voltage.

Only the preliminary stage – only when there are complaints

In the end 99.99 percent of the fastest protons – this number likewise conceals years and years of optimisation – are extracted from the cyclotron. But it’s not just the speed and the number of protons that are important for research; the quality of the proton beam is just as important. Essentially every component in all three accelerators does its bit. If they are not perfectly aligned, a beam is produced which is more reminiscent of the diffuse light of a light bulb. «A good beam, by contrast, is like laser light: compact and focussed», explains Grillenberger.

But the irony is that even at PSI people are not interested in the protons themselves. For a long time they were used for medical purposes: deep-lying tumours can be treated with them in proton therapy, and PSI now has a dedicated small accelerator for this purpose. Today, the proton beams are just a preliminary stage for the researchers. The protons collide with what are known as targets, special workpieces made of lead or carbon. They knock out neutrons or produce muons. Only the neutrons and muons, the secondary particles, are used for experiments. Partly in order to examine the particles themselves in the case of muon degradation and partly to use them as tiny probes for highly complex forms of microscopy. Then, for instance, muons are used to elucidate the properties of novel technological materials or neutrons are used to x-ray prehistoric objects. Around one thousand researchers come to PSI every year to do experiments using the secondary particles of the proton beam.

Joachim Grillenberger’s work also has a hint of irony. He only has dealings with the people for whom he does his research when something goes wrong at the end. «Only when the beam isn’t as it should be do the researchers come and find me», he explains with an understanding smile. And Grillenberger seems to be even more reliable than the Cockcroft-Walton. Sometimes this uncomfortable initial encounter has led to pleasant discussions and ideas for joint experiments. This allows Grillenberger to sneak back into scientific circles from time to time. He still has some researcher blood in his veins.