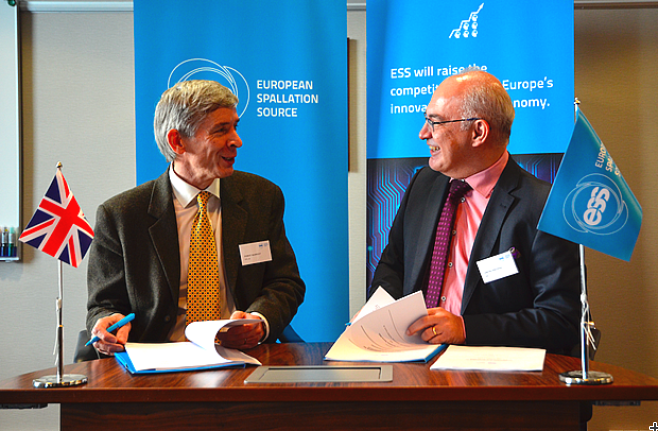 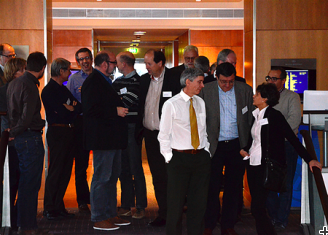 ICB Members of the ESS Instrument Collaboration Board with ESS employess at the December 4 meeting in Copenhagen. PHOTO: ESS

COPENHAGEN—The European Spallation Source (ESS) Instrument Collaboration Board (ICB) met for the fourth time on December 4 in Copenhagen. At the meeting a Memorandum of Understanding (MoU) was signed between ESS and the UK’s Science & Technology Facilities Council (STFC) indicating that STFC’s ISIS neutron science facility will become the lead partner for ESS instruments FREIA and LoKI.
Members of the ESS Instrument Collaboration Board with ESS employess at the December 4 meeting in Copenhagen (top). ISIS Director McGreevy in conversation with ESS In-Kind group leader Gábor Németh. PHOTOS: ESS

“This is very good news for the project,” remarked ESS Science Director Dimitri Argyriou. “It establishes the ISIS contribution and demonstrates a strong commitment from the UK to ESS and its ideal to provide excellent scientific opportunities for Europe. This partner has an incredibly strong tradition of excellence in neutron scattering and instrument building, and this is exactly what we need to ensure success with ESS.” 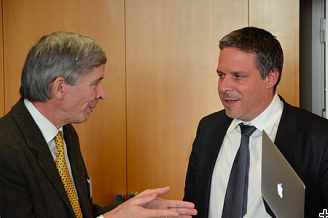 The ISIS neutron science facility at the UK’s Rutherford Appleton Laboratory has been a world-leading centre for research with neutrons in the physical and life sciences for nearly three decades and is one of the UK’s major scientific achievements. As Europe’s only pulsed spallation source it serves as the foundation for ESS, also designed as a pulsed spallation neutron source. The facility’s director, Robert McGreevy, is a member of the ICB and was on-hand to sign the agreement.

“To support neutron scattering you need a whole range of capacity and capability, you need a range of experience and knowledge and inputs—this is how science works,” said McGreevy. “ISIS has a lot of experience with reflectometry and SANS, we have a lot of experience with building any sort of instrument. So LoKI and FREIA are good for us, we know how to do these things and we have a user community who are interested in using them, and in using all of the instruments at ESS.”

FREIA and LoKI were both developed and proposed by instrument scientists at ESS. LoKI is already in the detailed engineering phase of its construction, and FREIA is just getting underway with preliminary engineering design. Both instruments, combined with the high flux and unique pulse structure of the ESS neutron source, are expected to have a major impact across a wide range of materials and life science studies. 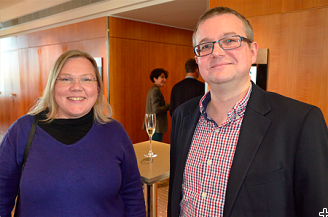 FREIA is the Fast Reflectometer for Extended Interfacial Analysis and will provide ESS with the first reflectometer in the world capable of performing fast kinetic studies of thin films and other advanced materials.

“I am very happy to have ISIS confirmed as the lead partner for FREIA,” commented ESS Instrument Scientist and FREIA lead proposer Hanna Wacklin. “And I am looking forward to working with their scientists and engineers who have a wealth of experience in constructing and operating no fewer than five neutron reflectometers at a spallation source. The instrument is in very good hands.”

LoKI was one of the first instruments selected for ESS and is expected to be the world-leading small-angle neutron scattering (SANS) instrument when construction is complete. ESS Instrument Scientist Andrew Jackson, lead proposer and lead scientist for LoKI, said that the STFC-ESS agreement “means that we can actually get on and build it. The next step is, we start on the detailed design work, and they have an engineer ready to go.”

“The MoU gives clarity to who is doing what going forward,” explained Argyriou. “This is a first step. In the coming months there will be many MoUs signed, ensuring that instruments will be realised. We have an experienced partner on board now that can guide many of our other partners and bring that experience into the wider ESS collaboration.”