Building ESS. The ESS civil construction project broke ground nearly 18 months ago as one of the largest infrastructure projects in Europe. With the Accelerator tunnel nearing completion, and the complex foundation work for the Target Station well advanced, all eyes are focused on technical installations beginning this year. 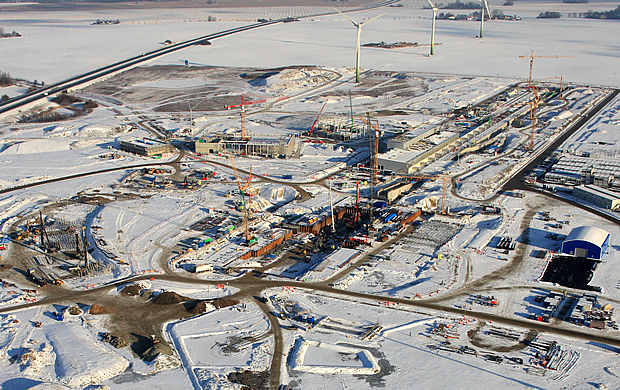 BRUNNSHÖG—The physical change of the ESS construction site over the last 12 months is dramatic. The flat brown landscape of earthworks and concrete reinforcement has morphed to a buzzing, three-dimensional hive that now includes power and drainage installation, interior finishing and roofing, and the continual work of foundation piling, concrete casting and new excavation.

Around 14,000 cubic meters of concrete are in place for the Accelerator tunnel alone. More than 4,000 concrete, steel core or bored piles have been sunk for the Target Station and Experimental Halls foundations. The project’s on-site workforce grows weekly, having nearly tripled in the last 12 months. There are now approximately 340 on-site workers representing 15 nationalities, including nearly 200 construction workers from companies based in the UK, Sweden, Poland, Estonia, and Lithuania. 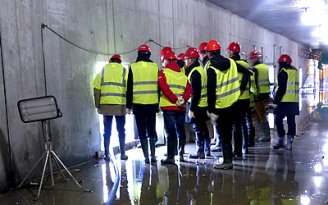 “It’s always uplifting to see how fast progress at the construction site is going,” says ESS Director General Jim Yeck. “What is more difficult to see is the momentum across the project as a whole. At the end of 2015, the entire ESS project reached 20% complete. This is absolute progress and it’s apparent that the pace is picking up. That energizes us here in Lund and our partners working across Europe.”

Early access to some buildings and facilities, including several areas of the Accelerator Systems, will be available this year. Full access to the Linac tunnel and Front End Building is expected in the spring of 2017. This includes the infrastructure, electrical and otherwise, required to begin installation work. The primary electrical substation building, known as H05, is the first to be completed and is being commissioned now.

“The Accelerator division will have partial access to their buildings this autumn,” says Kent Hedin, Head of ESS Conventional Facilities (CF) Division. “We are on track and look forward to the handover so the Accelerator teams can begin their installations and build the Accelerator.”

The project’s critical path dictates early focus on the Accelerator tunnel and adjacent areas. This is followed closely by the Target area, including buildings, installation tunnels, and the demanding monolith and hot cell foundations. Next are the Experimental Halls, the instrument Beamline Galleries, and then the laboratory and campus buildings.

The finished 537-meter-long Accelerator tunnel will come and go from sight quickly, as it will be buried under five to six meters of earth. Completion of the vault is anticipated next month, with backfill and topfill already underway. The tunnel walls are complete, extending from the Front End Building to the Target Station beam dump. Interior painting and floor polishing are in progress for several months already.

The large Klystron Gallery Building is being built in stages. It runs alongside the tunnel for most of the tunnel’s length and the two are connected by 27 two-storey concrete “stubs”. Construction of large areas of the Gallery Building, including the four-storey ‘cold box’ section, have progressed to interior and roofing works. Mechanical, electrical and plumbing (MEP) works begin in the tunnel and the gallery this spring. That’s an important shift in the type of work being done on a large portion of the site infrastructure.

As Accelerator construction is completed, work will ramp up on the Target area. Construction there has included the challenging and time-consuming steel core and concrete pilling work. By the end of January, 63% of the 6,000 concrete piles and 46% of the 356 steel core piles had been brought to the bedrock.

“We will start concrete work for the Target Building foundation in the Monolith area in March and April. That’s a major milestone for the project,” says Magnus Jakobsson, a Construction section leader for the ESS Conventional Facilities Division who works on-site with Skanska. Casting of the base slab for the large Experimental Hall is set to begin at the same time. 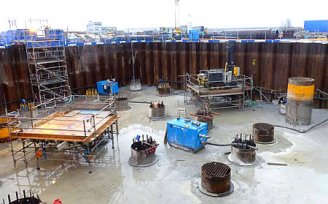 In November 2015, site workers celebrated the successful installation of the first of 63 large-diameter bored piles for the Monolith foundation. These piles are each 1.6 meters across and require a special pile-driver that had to be shipped from the UK in October. Once drilled, the piles are cast in place using a special procedure. The first casting followed several years of design work to meet requirements for earthquake proofing. Twenty-three have now been set.

Back in the office, Hedin’s CF Division is working closely with the Target Division and others to prepare documentation for The Swedish Radiation Safety Authority (Strålsäkerhetsmyndigheten, or SSM). Approval from the SSM will be an important ESS project milestone, and is key to maintaining the project’s construction schedule and cost planning.

“We’re working extremely hard now,” noted Hedin, “to gather information and give our input for the ESS SSM application that is due in May.” 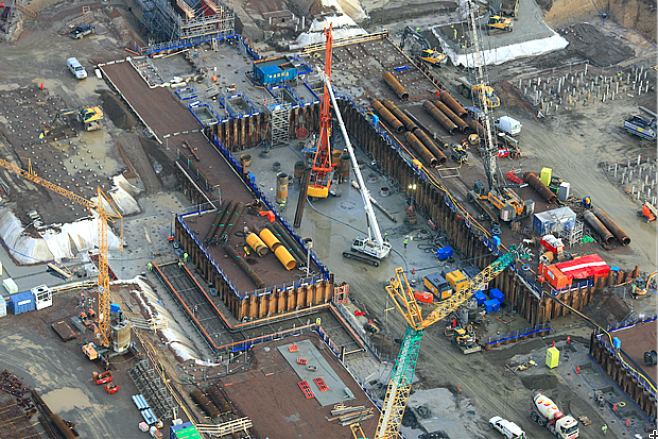 The successful completion of several milestones in a row, all on time, has instilled the project with an optimistic and cooperative environment according to Jakobsson. “There’s a good work culture of helping each other, where no one is left to solve problems by themselves,” he explained. “I also see good team spirit between the SEC organisation and our partners.”

Innovation in work methods has proven valuable for progress and efficiency. “For example, we’ve used the existing clay on the site to fill other areas, and made a mass balance on site. It’s not always done,” says Jakobsson. “We developed this procedure on-site and now it’s working very well from both an environment and cost perspective because we don’t need to transport any new masses to replace the clay on site.”

With the latest snows melted away, and spring milestones already in view, work at Odarslövsvägen 113—the address of the future European Spallation Source—continues to set the pace for the project as a whole.