On June 13, for the first time, our Dingo neutron radiography/imaging/tomography station has taken some neutron topography data, from the germanium (335) monochromator used on Wombat. Topography is distinct form conventional transmission radiography, in that one measures an image of the object via Bragg diffraction by the object out of the incident beam, rather than the straight through direct beam. 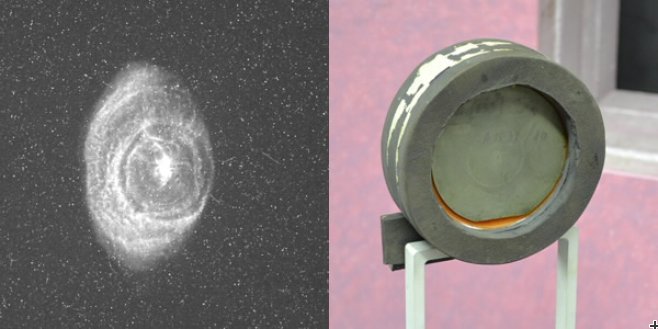 The first topography image is shown in Figure 1, depicting the Ge-335 monochromator from Wombat, as shown in Figure 2. Dingo’s CCD detector was turned sideways by 90°, away from the direct beam axis, in order to image the Bragg diffracted beam from the large crystal. The reflected neutron beam shows areas of modulated intensity, which indeed coincides with features seen at the surface.

As diffraction occurs from the bulk of the stacked germanium crystal, these surface features penetrate. Also, under 45° projection, the round crystal slab and beam opening appears oval, while the distorted area appears round – taking into account the 3rd dimension. Such germanium monochromator crystals are defect-engineered to obtain the desired mosaic spread, through plastic deformation, by bending the crystal into a spherical shape and subsequent ‘ironing’ to achieve flatness.

The strong inhomogeneities, i.e. the ring and the center most probably ﻿denote the areas where the die tool was applied, during plastic deformation. Such topographies not only bear the potential to map local crystal perfection, but also check entire monochromator assemblies for quality control. One could also use the method for other single-crystal systems, like the turbine blades in the cores of jet engines.

Congratulations to David Roach, Andrew Berry, Ulf Garbe and Klaus-Dieter Liss, who made the measurement possible.