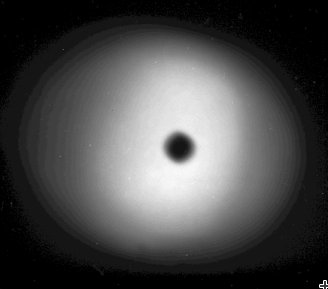 Cd disc on POLI A 6 mm Cd disc on the sample position of POLI homogenously illuminated by the 0.9 A neutron beam. | © Vladimir Hutanu / FRM II

The polarized single crystal diffractometer POLI has seen neutrons at its new beam line SR 9a for the first time. After more than three years of design and construction work, POLI is now independent from its mother instrument HEiDi. Now both single crystal diffractometers are able to measure independently using hot neutrons. POLI is operated by RWTH Aachen and financed by the Federal Ministry of Education and Research.

Instrument responsible Dr. Vladimir Hutanu reports about the first measurmente using a Cu test monochromator, which showed promising results, even over-performing the expectations regarding the beam’s quality and intensity. He is therefore confident that using the dedicated monochromators (which are planned to be built-in in the summer) POLI will become one of the most powerful and versatile single crystal diffractometers worldwide. The first friendly users are expected in autumn.