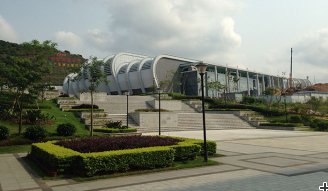 The neutron source is located some 30 km south-east of Dongguan and is one of the largest scientific facilities in China. Construction began in 2012 and the CSNS features a 200 m-long 80 MeV linear accelerator that feeds protons into a 1.6 GeV 238 m circumference synchrotron. In July 2017, the facility managed to accelerate a proton beam to 1.6 GeV for the first time. The protons are then fired into a solid tungsten target that will produce a 100 kW beam of neutrons with 25 bunches of particles released every second.