Research with neutrons offers unique insights into the internal structure of matter, making it a key technology for many areas of science. These complex studies are often undertaken at research reactors, many of which will reach the end of their operational life in the coming years. Forschungszentrum Jülich has begun to develop a concept for cost-efficient neutron sources which could replace mid-sized facilities. The new sources will operate without using reactor-typical chain reactions. Even smaller facilities on a laboratory scale can be set up using the same principle. Scientists presented the concept and the results of the first component tests in the January edition of the international journal European Physics Journal Plus (DOI: 10.1140/epjp/i2016-16019-5) and at the tenth anniversary celebrations of the Jülich Centre for Neutron Science (JCNS) on 17 February.

“High-performance microscopic analysis methods are an important requirement for the development of new materials and material systems. Due to their unique properties, neutrons are indispensable for scientists from many disciplines, from physics to chemistry, biology and geology, right through to material and engineering sciences,” emphasized Prof. Sebastian M. Schmidt, member of the Jülich Board of Directors, at the ceremony in Jülich. The uncharged components of atomic nuclei reveal, among other things, where atoms are located, how they move and what their magnetic properties are. In contrast to techniques such as electron microscopy or X-ray diffraction, neutrons also provide information about light elements and can also be used on sensitive samples.

These scientifically and technically demanding analyses take place at large and medium-sized specialized research facilities, so called “neutron sources”, often at research reactors. However, several of these are due to be taken out of service over the next five years.

The Jülich concept is based on the use of the newest technological developments, enabling an accelerator-based production of tightly bundled neutrons. Unlike the situation at reactors, chain reactions do not take place – instead, neutrons are released by colliding accelerated deuterium atoms with metal foil.

The new neutron sources allow neutrons to be used especially efficiently for selected purposes. “For specific scientific questions, it will be possible to achieve results that are not inferior to those obtained at current leading sources, and at around just 30% of the cost,” explained Prof. Thomas Brückel, Director at the JCNS. The bundled neutrons are especially suitable for use in studying small samples such as protein crystals that are often smaller than a cubic millimeter. In this way, for example, the position of lighter elements can be determined, which is often of crucial importance in terms of biological functions.

To begin with, the project’s feasibility will be demonstrated using a prototype. Jülich scientists have already optimized the first components of the HBS using computer simulations and tests on prototypes. The Helmholtz Association has included the project in its “Roadmap for Research Infrastructures 2015” due to its importance for Germany as a centre for research.

“In terms of research with neutrons, Europe leads the way world-wide, thanks to its network of neutron sources. Even the future European Spallation Source (ESS) currently being developed in Lund, Sweden, as the most powerful accelerator-based neutron source in the world cannot fill the gaps created by the decommissioning of the research reactors,” explained Brückel. “In order to carry out certain types of scientific experiments, acquire users, train junior researchers and develop new methods, we still need a European network of neutron sources.”

The Jülich Centre for Neutron Science

Since its establishment in 2006, the Jülich Centre for Neutron Science has been successful in its strategy, unique in neutron research, of offering its users outstanding instruments at leading international neutron sources, and combining this with an excellent scientific environment for selected research areas. JCNS is involved in operating five instruments at the Institut Laue-Langevin in Grenoble, France, the most powerful neutron source in the world. Under the umbrella of the Heinz Maier-Leibnitz Zentrum, at the most powerful German research neutron source in Garching near Munich, JCNS is currently operating eleven neutron instruments, together with partner institutions; two further instruments are under construction. At the Spallation Neutron Source in Oak Ridge, USA, a Jülich neutron spectrometer is the only non-American measuring instrument enabling German and European researchers to gain valuable experience for the construction and operation of instruments for the ESS. Forschungszentrum Jülich has sold three instruments to the China Advanced Research Reactor near Beijing; German researchers are also free to use the instruments there. 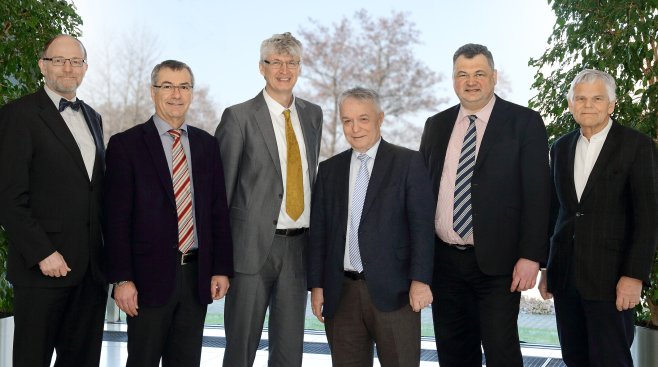