From Berlin to Garching: two new instruments for the MLZ 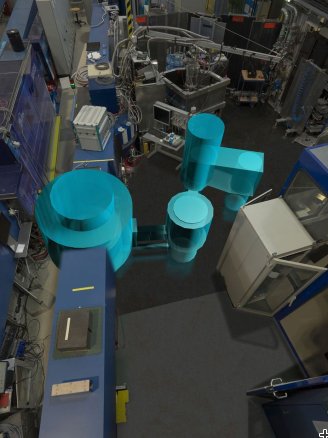 At the end of 2019, the neutron source used for materials research at the Helmholtz-Zentrum Berlin (HZB) was shut down as planned. Now the Heinz Maier-Leibnitz Zentrum (MLZ) in Munich is taking over two scientific instruments from the HZB. The Federal Ministry of Science and Research (BMBF) is funding the relocation and adaptation with 5.62 million euros.

Currently the MLZ provides its users with 26 scientific instruments for neutron research in Garching. Four more are still under construction. Now, the researchers can look forward to two additional new arrivals: the three axes spectrometer FLEXX, which will be called LaDiff in the future and accordingly will also offer Larmor diffraction, and the diffractometer FIREPOD. Both were previously located at the Berlin neutron source BER-II and will move to Garching within the next four years.

Since it became known that the Helmholtz-Zentrum Berlin will shut down its neutron source at the end of 2019, the MLZ was trying to acquire some of its instruments. It quickly became clear that the three-axes spectrometer and the diffractometer would be good candidates to move to Garching.

Instruments are still available to the user community

“Both instruments were in great demand, our international guests and our own teams gained deep insights into complex material systems and published their results in the best scientific journals”, says Prof. Dr. Jan Lüning, scientific director at HZB. “We are therefore very pleased that these instruments will go to the MLZ and continue to be available for the worldwide neutron user community.” Meanwhile, almost all of the highly specialized instruments used at BER-II either already have new homes or concrete prospects for further use.

The two inbound instruments must be partly rebuilt and adapted to the conditions on site. “In this way, we are preserving these unique instruments for the community of neutron users and at the same time expanding their range of applications,” explains Dr. Wiebke Lohstroh, who heads the instruments of the Technical University of Munich at MLZ.

FLEXX, now also known as LaDiff, will move into the west neutron guide hall of the FRM II neutron source in the immediate neighborhood of the three-axes spectrometer MIRA . It will offer both Larmor diffraction and triple-axis spectrometry in accordance with the recommendations of experts on the MLZ’s committee for beam time allocation. “LaDiff will create new possibilities to measure lattice constants in an external magnetic field with previously unattainable precision, and thus interest new user groups”, says Prof. Dr. Peter Müller-Buschbaum, scientific director at the MLZ and the research neutron source Heinz Maier-Leibnitz (FRM II).

Demand for measuring time at the MLZ exceeds supply

The demand for powder diffraction at the MLZ also remains high. With this method, researchers determine the exact position of atoms in a substance and make chemical reactions (in batteries for example) visible. Because of the high demand, scientists of the Karlsruhe Institute of Technology and the Technical University of Munich are currently constructing the powder diffractometer ErwiN (Energy Research with Neutrons) in the experimental hall of the MLZ. The new addition from Berlin, FIREPOD, will mainly be used for the fast measurement of a variety of samples, e.g., novel lithium-ion batteries, and will be set up directly next to ErwiN and the high-resolution powder diffractometer SPODI. “As a high-throughput powder diffractometer with high resolution, FIREPOD will complement our powder diffractometer SPODI as well as ErwiN, which is currently under construction”, says Prof. Dr. Peter Müller-Buschbaum. “The demand for measuring time at the MLZ currently exceeds our supply many times over. With two additional instruments we are strengthening our capacities in the long term.”

The BMBF funding of 5.62 million Euro runs for four years beginning September 15, 2020 and includes positions for scientists and engineers. After all, these moves are not that easy to accomplish. “Neutron scattering instruments are complex setups that are optimized for the respective neutron beam and adapted to the local conditions”, explains Wiebke Lohstroh. “Therefore, a simple 1-to-1 move of the two instruments to the MLZ is not possible, and the move includes both adaptation and renewal of technical components”. The work in the halls has already started: Next to MIRA, space for LaDiff will be cleared.