From the garage to the world 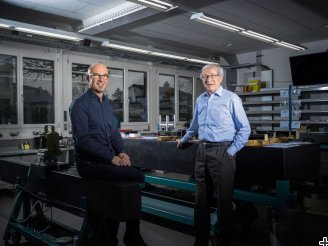 In 1999, PSI researchers founded the spin-off firm SwissNeutronics. Today the company has a staff of 15, sells high-precision components to research institutions all over the world, and still is based in the small town of Klingnau – not far from PSI.

Eight million Swiss francs – in the 1990s, that would have been too great an expense for the PSI researchers. Eight million is what it cost then to order certain high-precision components – so-called neutron guides – from an outside company. It was a sum the overall proposed budget for the project couldn’t accommodate. This called for a creative solution. “So we decided to produce these neutron guides ourselves”, recalls Albert Furrer. That this decision would have far-reaching consequences – among them the founding of SwissNeutronics, now the oldest PSI spin-off – was not anticipated at the time.

Furrer actually retired 12 years ago. But he doesn’t let such formalities hold him back. At PSI, the ETH Zurich emeritus professor and co-founder of PSI’s neutron research still has an office of his own. The office is very small and smells – in spite of the PSI-wide smoking ban – distinctly of tobacco. On the desk, between stacks of papers, lies a pipe. In front of the desk sits Furrer, with grey hair, grey moustache, glasses and a friendly smile, looking hardly changed in comparison to a photo from the earliest years of SwissNeutronics.

From his office window, part of the PSI West campus can be seen. This is where the PSI neutron source SINQ, one of PSI’s large-scale research facilities, is located, taking up an entire building. This facility was inaugurated in 1997. With neutron guides that had been designed and produced by Furrer and his former colleagues.

“Make those for us too”

When SINQ first went into operation, Furrer recalls, there was a big international conference in Interlaken in central Switzerland, which naturally included an excursion to PSI. “So 700 people from the whole world saw our home-made neutron guides, and a few of them said: ‘We could also use that, for our neutron source. Make those for us too, and we’d buy them from you!’”

Furrer and the other neutron researchers thought it over. The idea appealed to them. “But it was clear to us: Something like that is not part of a research institution’s mission.” So Furrer and several of his colleagues founded the firm SwissNeutronics in 1999. Still today, Furrer is a member of the management board, in parallel with his status as an emeritus professor at ETH Zurich. 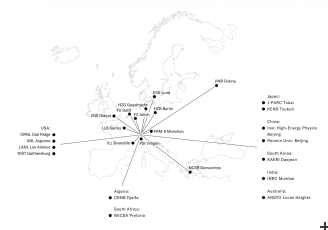 “In those days, we really did start in the garage of one of these colleagues, in a private garage in Birmenstorf”, Furrer laughs. There were five founding members. In the garage, the physicists stuck together four long, slender glass plates at a time to form a quadrangular tube. They had previously coated the long pieces of glass with a filmy layer of metal. This coating on the inside of the tubes made them into neutron guides. In research, these are required to direct neutrons from the neutron source to the various experiment stations. There the neutrons are used in much the same way as X-rays in medicine: Neutrons penetrate objects – metallic components, fossils, historical items – and make their interior visible.

For the application of the crucial metal coating, the newly minted entrepreneurs were permitted to use the PSI-developed fabrication recipe, as well as PSI’s own coating machine. “For both, in the start-up years, we negotiated a licence agreement with PSI”, Furrer clarifies: From the beginning on, SwissNeutronics has been an independent company that receives no special advantages at PSI just because the founders used to work there.

The garage era didn’t last long. Already in the year 2000, SwissNeutronics moved into an industrial building in Klingnau – a small town about five kilometres north of PSI. A plant expansion followed in 2004, with a move within Klingnau into the current building. There Christian Schanzer, operations manager of SwissNeutronics since 2007, welcomes the visitor with a firm handshake. Hair cut too short to show its colour, glasses, a level-headed demeanour. He stands in the entry area of SwissNeutronics, which is graced by a gleaming black granite floor. A light odour of machine oil hangs over it, though, and gives an impression of the mechanical workshop, polishing room, high-vacuum coating plant, and assembly hall that lie behind the office wing.

“Clearly, the neutron guides are our core business, accounting for 80 percent of our turnover”, Schanzer says. “But that market is a special one.” Worldwide, there are currently around 20 neutron sources that can be considered as potential customers. For that reason SwissNeutronics, which employs a staff of 15, has built up a second pillar to support the business: To position the neutron guides precisely enough to satisfy the researchers’ requirements, SwissNeutronics works with special laser trackers. SwissNeutronics offers these laser trackers and associated services to companies in the surrounding area. In the neighbouring community of Döttingen, Schanzer says, are the editorial offices of the regional newspaper “Die Botschaft”. “For some time they had the problem that the printing machines were ripping the paper. So they hired us. We went with our laser trackers and were able to determine, to a precision of less than one millimetre, what had to be done to get the machines properly calibrated.”

Through assignments like this, the SwissNeutronics team enters into exchanges with other local and Swiss companies. “We also order our raw materials and components, whenever possible, from firms in the immediate vicinity”, Schanzer says. On the other hand, however, there is only one Swiss customer that can buy neutron guides from them: PSI.

“Swiss” in the name demands commitment to quality

The proximity to PSI is especially important because quality inspection is still done at the local neutron source SINQ. One of the instruments, “Narziss”, is equipped exclusively for testing purposes. Here SwissNeutronics books a flat-rate share of the available experiment time. “At Narziss we check 20 percent of the components that are subsequently delivered to customers in the final products – that is our standard when it comes to quality control”, Schanzer explains.

Quality is the keyword it all comes down to, over and over again. “What I heard as a child about Swiss precision, I find again here: reliability, punctuality, and quality”, says Schanzer, who originally comes from Bavaria. SwissNeutronics has two competitors worldwide: one company in Heidelberg, Germany, and one in Budapest. “Switzerland, obviously, is not a low-wage country”, Schanzer continues. “Nevertheless, we are able to hold our own internationally. Having ‘Swiss’ in the name definitely helps us, and it keeps us duty bound to uphold our Swiss quality.”