Magnets are the unsung heroes in particle accelerators because they keep protons or electrons on track. But such magnets have very little in common with the small ones on the domestic fridge door. Quite a few of the magnets at PSI are heavier and bulkier than the fridge itself, yet despite this they are also masterpieces of precision and control. 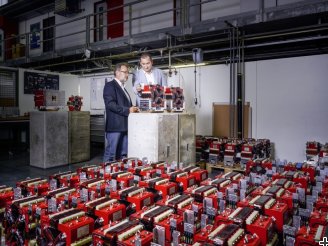 Some things are easier to handle when you roll them up. For instance, it’s easier to carry a poster when you put a rubber band around it. At PSI, particle accelerators get protons and electrons to tear along close to the speed of light. In this case, magnets play the role of the rubber bands. Without them the particles would simply fly in a straight line and be lost within a fraction of a second. Therefore magnets are used to steer the particles along a circular trajectory in the accelerator. Once the particles are moving fast enough, they are used to generate neutrons or x-ray light that enables us to look inside matter.

«Besides the particles, the most important components of an accelerator are an electrical field to get the particles moving, an excellent vacuum which prevents the particles from colliding with air molecules, and, of course, the magnets which steer the particles», explains Jürgen Duppich, PSI Division Head Technical Support/Co-ordination and Operation.

In a nutshell: each magnet generates a magnetic field. When an electron or proton flies through this magnetic field, it trajectory is deflected. The direction and force of the deflection depend on the magnet. It must, therefore, be manufactured to precise specifications and placed in exactly the right position to ensure that the particles move along the desired trajectory. 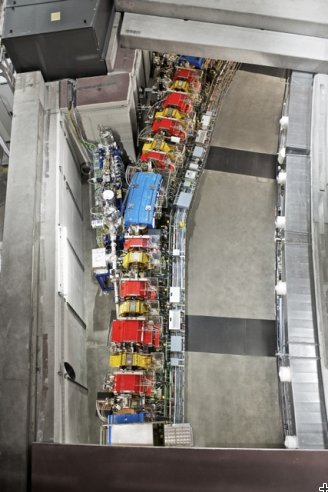 Parts of the beam tube Part of the accelerator facility of the SLS. The beam tube through which the accelerated electrons are moving is almost completely surrounded by magnets (in blue, red and yellow) that both steer and shape the beam.

Magnets: a few kilograms up to the size of an elephant

It is this precision which makes the PSI magnets so special. For instance, the Swiss Light Source SLS is circular and about the size of a football pitch. The electrons complete about one million laps of the SLS each second. But the magnets keep them on a course that is accurate to one-thousandth of a millimetre. What’s more, the magnets continuously shape the particle beam. Mostly this involves keeping the particles close together.

Stéphane Sanfilippo and his 10-strong team work on the magnets to achieve this precision and constantly improve it. They are in charge of about one thousand magnets at PSI. Their shape and size vary enormously. The elephant-sized giants in the proton ring cyclotron weigh 240 tonnes; other magnets used to finely adjust the particle beam are just a few kilograms.

One common feature of almost all the PSI magnets is that they are electromagnets. Unlike the magnets on the domestic fridge door, electromagnets are power-driven and can, therefore, be switched on and off. They mainly consist of a wire which is wound around an iron core to form a coil. The magnet is only active when electricity is flowing through the wire. As soon as a magnet is slightly bigger than a football, it needs high-voltage current and cooling water because the current-carrying wire heats up.

The expert magnet group at PSI is positioned at the interface with many other working groups. «The accelerator physicists tell us how the magnet is supposed to influence the particle beam», explains Sanfilippo. The typical PSI magnet also needs a feeder for its power supply and a water connection to the cooling system. Last but not least, the magnet’s dimensions must allow it to fit into the facility. It can’t be too big, but there must be enough space inside the magnet to accommodate the vacuum pipe through which the charged particles speed along. «Once all these conditions are in place, it’s time for us to get to work!» Since he took over as head of the expert magnet group in 2008 Sanfilippo has been tackling this challenge. And when he calls his magnets the «lifelines of the accelerator», he really means it.

When a new magnet is to be constructed, Sanfilippo and his colleagues take the specifications and get to work. The magnet is designed using the computer and its magnetic field can be calculated. For instance, magnets with two coils, known as dipoles, are needed to deflect the particle beam. Quadrupole magnets with four star-shaped coils are used even more frequently at PSI; they focus the particle beam.

Once the computer model is finished, the magnets are built by private companies. «We prefer to concentrate on what comes next», says Sanfilippo, «and that’s measuring the field of the finished magnet».

For industry, the extreme precision required by the PSI researchers is unusual. No matter how good the theoretical model is, unavoidable production tolerances can lead to the coils still not being precisely positioned, and so this can result in a slightly distorted magnetic field. This, in turn, has far-reaching consequences for the particle beam. But Sanfilippo and his colleagues have experience with this, too. They already factor in a reserve in the model for the main parameters to even out any production deviations – should this prove necessary as result of their measurements.

Tried-and-tested field measurement tools are used here. For instance, a Hall probe can be used to record the strength of the field at a certain location. By advancing the probe slowly through the magnetic field, a three-dimensional field map with several thousand measurement points can be produced.

New developments in magnet science which may benefit the successful operation of the PSI magnets also get their chance because the trend over the last 20 years, explains Sanfilippo, has not been for building strong magnets, but precise ones. This explains the air-conditioned room in the atelier of the expert magnet group where the magnets are measured with a vibrating wire behind a pane of glass. «There are only a few of these systems in the world», says Sanfilippo not without pride.

Although the term «vibrating wire» sounds simple, it is in fact a highly sensitive measurement system. The core consists of a taut, vibrating current-carrying wire. When it is exactly positioned on the central axis along which the magnetic field of a quadrupole magnet has a zero line, the wire stops vibrating. Since this area is infinitely small in theory, it is all the more difficult to identify.

And precise measurements involving the vibrating wire are not necessarily the end of the story. As magnets become increasingly precise, the more precise the measurement facilities have to be as well. When Sanfilippo and his colleagues aren’t in the process of designing new magnets, they work on fine-tuning the methods for magnetic field measurements.

Finally, the new magnet is installed in its future position inside the accelerator. Here, too, the highest mechanical precision is needed. You could compare the magnet to an optical lens – it, too, only deflects a beam of light as planned if it is perfectly oriented. Hence, measurement marks are made on the magnet’s external surface already during the planning phase. Inside the facility a laser tracker takes its bearings from these marks enabling the magnet to be positioned exactly.

Then, finally the electromagnet is up and running, and hopefully for a long time. Some PSI magnets reliably go about their business for more than 40 years. «Magnets are very robust», explains Duppich. «Nothing rotates, there is no mechanical strain.» Once they have been perfectly installed, they are good-natured, tenacious «co-workers». The technicians’ team is grateful to them and treats them with respect. This is also because the special iron which constitutes the core of the electromagnets is expensive. When a magnet is taken out of service, its parts are recycled and made into new magnets. «The soul of a magnet doesn’t die»–is how Duppich ceremoniously puts it. The magnets really are the lifelines of the accelerator.