2016 Anticipated to be a Watershed Year for Instrument Projects

IKON10.The semi-annual IKON meeting has become the forum for ESS and its in-kind partners to make a clear assessment of instrument construction progress. The focus of February’s meeting was less on the activities of individual instrument teams than the multidisciplinary collaboration as a whole. 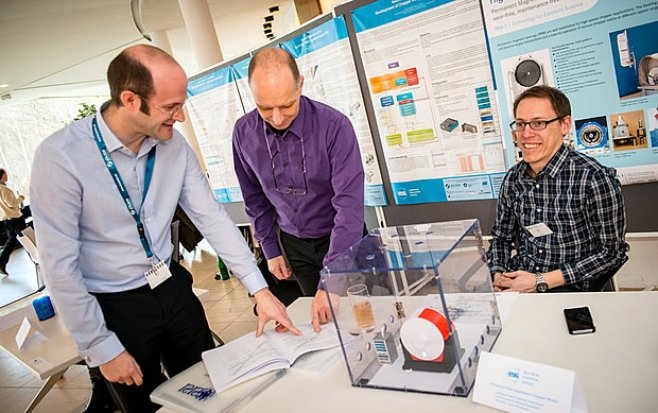 DÜSSELDORF and JÜLICH—The European Spallation Source (ESS) Neutron Scattering Systems (NSS) project is a complex puzzle of dependencies that span borders, institutions, funding agencies, science and engineering disciplines, and commercial industries. When delimited by time constraints and the dependencies of the larger ESS project schedule, coordination of activities becomes as critical to the success of an instrument as the design itself. A working meeting, the 10th In-Kind Coordination Meeting for NSS (IKON10) ambitiously addressed the many details of these collaborative conundrums in groups of two, four, 20, 60 and 160. 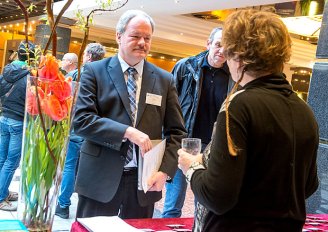 “The ESS In-Kind model is a massive challenge and a great asset,” said NSS Project Leader Shane Kennedy in his presentation on the management of the NSS project. “As a Greenfield site with no history of neutron scattering in the area, the only way to build ESS is to have the best of the neutron scattering community help us. We have secured €190.6 million in in-kind commitments so far, which is 84% of our target.”

‘We Will Do Entirely New Experiments’
The meeting took place February 16, 17, and 18 in Düsseldorf, Germany, and at the nearby Jülich Centre for Neutron Science (JCNS). Forschungszentrum Jülich (FZJ), which is a lead partner on three of the first 16 instruments, was the event’s co-sponsor together with ESS. The meeting also marked the 10th anniversary of the inauguration of JCNS, and a portion of the proceedings were dedicated to talks and a science lecture marking the occasion.

“I am very, very excited about the ESS project,” declared JCNS Managing Director Thomas Brückel, addressing the large crowd of IKON attendees and JCNS staff. “It is the first time the entire neutron community in Europe is working together to create one goal—the brightest source in the world. We will have two to three orders of magnitude gain on every instrument compared to some of the best existing instruments. It is clear we will not do more of the same, we will do entirely new experiments.”

It was also clear that one of those new experiments is the management of such a broad collaboration.

Budget Revisions to Ensure Goal of Early Scientific Success
The instrument project is divided into phases, and 2016 is the year that each of the 16 instruments is expected to make substantial progress in Phase 1—to establish a negotiated scope, schedule and budget, as well as to secure all in-kind partners for the instrument’s engineering design and construction. It is anticipated that anywhere from six to ten instruments will be ready for user operations in 2023, with the remainder close behind. 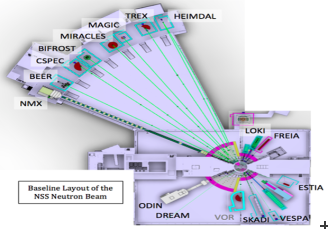 “The challenge for 2016 is to match each instrument’s scope with its budget,” stated Andreas Schreyer who opened up the meeting with his first IKON address as ESS Director for Science. “I have been six weeks on the job, and the ESS Council asked me, ‘How do you want to do it?’ We do this first by aligning the instrument budget with the overall NSS budget, and we develop a realistic schedule that ensures early scientific success. To accomplish these things we will need to critically revise the NSS budget this year. This is going to mean a lot of hard work for all of us.”

The plan for each instrument team in 2016 is to consult early on with its Scientific and Technical Advisory Panel, or STAP, a group of external experts in the relevant instrument class who also participated in the instrument selection process between 2012 and 2015. This meeting is intended to establish the instrument’s day-one specifications. By the end of October, it is expected that most instrument teams will have also completed a scope-setting meeting with ESS, where budget, schedule and day-one requirements are established as part of the larger project schedule. With this information, Schreyer will propose a detailed instrument construction strategy first to the Science Advisory Committee (SAC) in November, and finally to the ESS Council in December.

Schreyer then challenged each of the instrument teams to set firm dates for their STAP and scope-setting meetings before leaving Düsseldorf.

Dependencies Abound: Bunker, Layout, PSS, and German Funding
Often presented as a series of chicken-egg problems and Catch-22’s, the instrument puzzle is made up of many moving parts. The discussions at IKON10, while covering the full scope of the NSS project, coalesced around a handful of issues. Two of these—the Bunker design and the impact of delays in the release of German national funding—were continued discussions from last September’s IKON9 meeting, and the way forward on the two issues was made clearer. Two other topics—ESS’s development of Personnel Safety Systems (PSS) and the proposed instrument layout baseline—were introduced at IKON10.

Advances in the design of the ESS Bunker were presented by NSS In-Kind Engineer Sarah Ghatnekar Nilsson, with the expectation that decisions on materials and the conceptual engineering design will be complete by mid-2016. Having moved beyond several of the issues raised at the September IKON meeting, it was nonetheless clear that open questions remained, including the need for an in-kind partner in the construction of the massive 15,000-tonne structure.

The final design of the Bunker, which provides common radiation shielding for some portion of all of the instrument’s neutron beam guides, will impact the design and budget decisions of the instrument teams. It will factor in requirements for major components like neutron guides, choppers, and expensive shielding.

Expected April 1 is the all-important move by the German government to release national funding to the German ESS partner institutions. Until this happens, some of the instrument projects with German involvement will be unable to formally begin Phase 1. “The German contribution represents 26% of the instrument project, and that number is spread across the critical systems of six different instruments,” noted Kennedy.

Ghatnekar Nilsson also introduced the baseline instrument layout drafted by ESS in January, and some objections were noted. Where an instrument’s neutron beam guide and sample environment are placed relative to other instruments, the Bunker, and even the walls of the facility, serve as key factors in the instrument’s requirements, cost, and operations. The layout will be finalised sometime this year pending feedback from instrument teams.

One of the most discussed presentations at the meeting was the one that did not come out of NSS activities, but rather from the ESS Integrated Control System Division (ICS). ESS Senior Engineer and PSS Work Package Leader Stuart Birch introduced the instrument teams to many of the stringent requirements for the PSS and how it will be applied facility-wide.

The system will protect ESS users and staff from all manner of harm, including dangers posed by radiation, high voltage, magnetism, moving parts, lasers, and many other risks associated with industrial and scientific workplaces. It includes standards like colour-coded emergency lighting, key exchange protocols, and mechanisms to completely shut down the Accelerator and eliminate the beam in a fraction of a second.

Instrument-specific adaptations to the system must be included in the detailed engineering design of each instrument and the cost factored into the instrument’s budget. Birch estimated that the PSS would add up to 50 days to each instrument’s installation schedule and anywhere from €50-150 thousand to its cost. 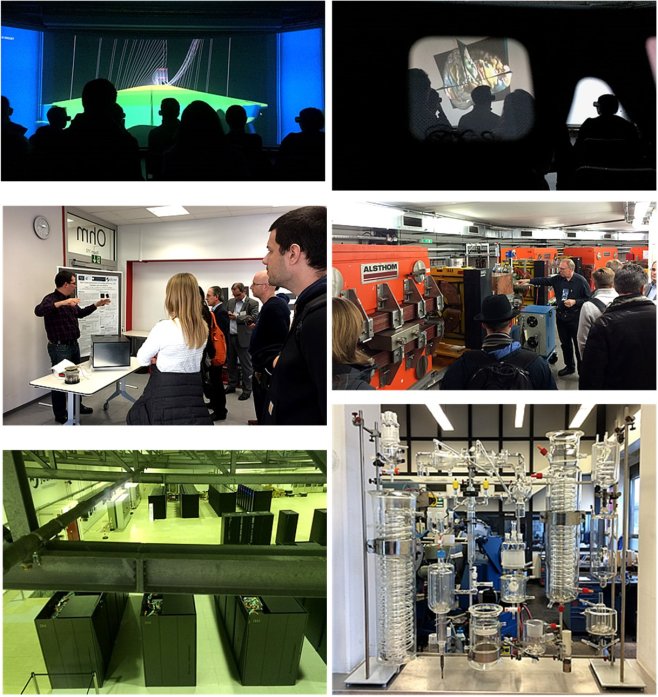 Meeting Focus Shift Signals Project Maturity
Many other parallel sessions, one-on-one meetings, and a poster session were held to discuss the detailed progress of the R&D and other work being done on detectors, choppers, motion control, automation, optics and shielding. The developing role in instrument design and planning of the ESS Data Management & Software Centre and its collection of in-kind partners was the focus of several small meetings. Each instrument has specific needs that must be met by every one of these groups.

“This is going to be a very heavy year,” noted ESS Research Engineer Scott Kolya during his presentation on detector readout electronics. “The clock is ticking and we all have to pull together. Come and talk to us, we’re here to help you.”

A twice-repeated session on the interfaces between the Science Support Systems groups and the instrument teams brought into focus the mission-critical impact of sample environment and user support labs infrastructure. The emphasis here was to establish instrument construction standards that will in turn allow for a standardised approach to sample environment equipment and the sample workflow itself. ESS scientist Zoë Fisher, in her presentation on developments in the construction of user support labs, highlighted the in-kind agreement with the UK’s ISIS neutron facility to provide detailed design and delivery of all components for chemistry, physics, soft matter, and life science labs at ESS.

In his remarks during the final feedback session, ESS Chopper Group Leader Iain Sutton spoke for many when he noted a general shift in the nature of the IKON meetings. “The focus is now engineering issues and cost, which I think demonstrates increasing project maturity.” He also noted the shift from issues of procedure and documentation to more tangible problems with revelations like, “Wow, that’s a lot of choppers we’re talking about! Could there be supply delays or procurement issues? The questions are coming in thick and fast.”

Homework
As the feedback presentations came to an end late in the afternoon of the meeting’s third day, Science Director Schreyer stood for one final request: “I still need to collect some homework!” Thirty or so hours after issuing the assignment, Schreyer initiated a roll-call of each instrument team asking them to declare a date for their STAP and scope-setting meetings. The schedule was roughed out there and then, with most teams able to commit to completing their meetings by the November 2016 deadline.

IKON11 will take place September 13-15, and is being organised by ESS.