The Instrument Collaborations. Instrument teams and in-kind partners from around Europe came together in Lund with developers of neutron technologies, science support systems, and data management and software for the European Spallation Source’s 9th In-Kind Collaboration Meeting for Neutron Scattering Systems. 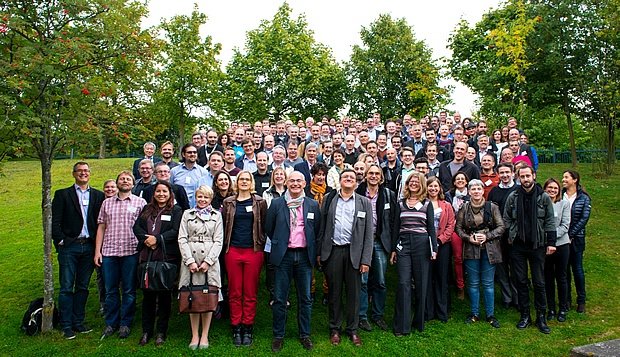 LUND—In his opening remarks at IKON9—the 9th In-Kind Collaboration Meeting for Neutron Scattering Systems (NSS) at the European Spallation Source (ESS)—Science Director Dimitri Argyriou compared the next 5-10 years of instrument construction to the cycling leg of a long-distance triathlon. The comprehensive two-day event was in fact good stamina training. Held in Lund on September 21-22, and attended by more than 160 people from throughout the NSS partner sphere, IKON9 featured nearly 100 presentations on ongoing work for the ESS instrument project.

“The swim, arguing the case for the world-class ESS neutron facility, is successfully accomplished,” declared Argyriou. “Now is the exciting time to cycle and build ESS and the instruments, even as we look forward to the running section when we produce the ground-breaking science.”

The overall impression was that the instrument collaboration teams have in fact towelled off, suited up, found their riding partners, and grabbed their bikes. Some were riding smoothly, others studying the route, and still others pulling out of minor skids or repairing flat tires. The general feeling, however, was that the right teams have been assembled and are riding the right bikes, even if some would have preferred more expensive models. 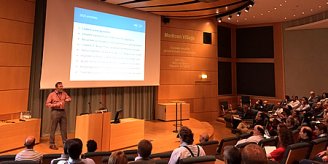 Jim Yeck, ESS Director General, opened the proceedings by noting the achievement of recent project milestones, including the establishment of ESS as a European Research Infrastructure Consortium, or ERIC. This is a key development for the instrument projects as each depends on in-kind collaboration, and the ERIC will have the effect, in some cases, of hastening the availability of national funds for the instrument teams.

“We pursue an open and collaborative, sustainable approach to our work, demonstrating that we are driven by the project schedule—what I’d call ‘a project culture’. That’s key for being successful in our roles and building the ESS facility,” said Yeck, pointing out that the construction of ESS is more than 15% complete, has over 100 institutional partners working throughout Europe, and directly employs around 350 people representing more than 45 different citizenships. “In summary, I think it’s safe to say there has been excellent progress launching the ESS Construction Phase.”

‘Changing the way neutron science is working in Europe’

Argyriou then took the stage where he emphasised the dynamic state of the NSS project by highlighting some key personnel changes as well as the recent activities of the two advisory boards, the Scientific Advisory Committee (SAC) and the Instrument Collaboration Board (ICB). The ICB, established just in the last year, has already played a key role in establishing instrument MoUs, which help to define how partners work together to deliver an instrument; and the SAC now has before it the task of sequencing the construction of individual instruments in order to deliver early scientific impact at ESS. 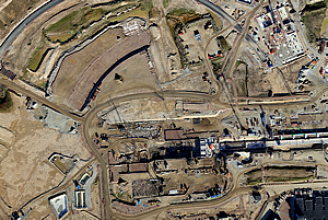 Stating that he expected the discussion on how to align instrument partners with instrument resources to continue into December, Argyriou outlined his expectations for the next six months. These include finalising the suite and its resource configuration; signing MoUs for all 16 instruments; bringing ODIN through to Phase 2, where it will join LoKI and NMX; and moving the next wave of instruments into Phase 1, Engineering Design. Also anticipated is the announcement of a new Director for Neutron Science Facilities, expected to enter the project early next year. 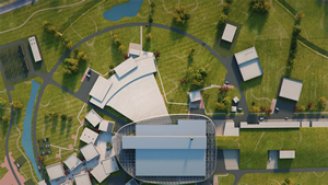 Argyriou introduced Masa Arai to the in-kind crowd along with Shane Kennedy. Arai, who played a key role in the construction of J-PARC, in Tokai, and served as director of its spallation source, was brought into ESS as a Technical Coordinator in April. Kennedy, the former Technical Director of the Bragg Institute in Sydney, also began work this spring as a Technical Coordinator, and serves jointly as the ESS Deputy Science Director and NSS Project Leader. Kennedy was responsible for delivering the neutron instruments at Bragg’s OPAL reactor source over the last decade.

“Delivery, that’s where I come in,” announced Kennedy, addressing the group for the first time in his new role. “It’s clear what the goal is and what we need to do. To deliver 16 world-class instruments by the end of 2025; to provide sample environments, labs, and workshops to support instruments; and to build a team of skilled, scientific, technical, and administrative staff to operate the neutron science program.”

The deputy Science director went on to elaborate on the NSS budget constraints, the breakdown of budget and tasks between in-kind partners and ESS, and set the goal of securing signed technical annexes—that is, formalised in-kind commitments—for the Phase 1 design of 8-12 instruments in the next six months. “Collaboration,” Kennedy underscored, noting that 65% of the instrument budget is in-kind deliverables, “is very much the key to our success.”

Two Steps Forward, One Step Back
Two optimisations in the ESS facility design have presented challenges to instrument development, and these issues arose repeatedly in the presentations and discussions at IKON9.

The redefining of the target moderator baseline design, based on an optimisation that will greatly increase neutron brightness at ESS, has meant that several of the selected instruments have had to revisit their guide system designs and validate those changes with new software simulations. 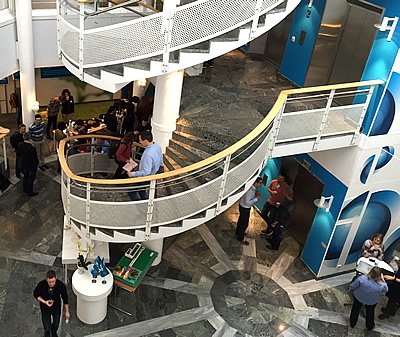 The second facility-wide optimisation concerns open questions around the bunker design and shielding systems. A final determination of the design here will again have implications for many instrument guide systems and other instrument parameters. In one parallel session, Stuart Ansell of the ESS Neutron Optics & Shielding Group gave a spirited presentation on the “super void bunker”, a novel bunker design that is under development. Based on the established concept of cavity shielding, the bunker uses a large void to capture background radiation rather than the more conventional solution of massively thick, and expensive, shielding blocks.

Also addressed in the IKON9 parallel sessions was how both optimisations, while necessitating design changes for some of the instruments, are also having positive outcomes for instrument construction generally. By collectively addressing the necessary adaptations to the new moderator and potential bunker setup, cost-saving modular solutions are being discussed as applicable across multiple instruments.

A handful of very positive presentations by the ESS Detector Group gave the impression that detector development is full steam ahead. A contributing factor frequently mentioned in this context was the BrightnESS project, a €20 million EU grant to support, among other things, technical work packages for the target, moderators and detectors. This money has hit the ground running, and the results are novel detector designs that are showing promise early on.

Discussions on the ESS instruments MAGiC, BEER, DREAM and others, highlighted the boost that the successful ERIC transition will have on these projects. Establishing the European Spallation Source ERIC has made the German funding pathway clear, initiating the turnaround of funding proposals from instrument teams at German partner institutions. With more than a quarter of the ESS instrument budget coming from German partners, impacting at least seven of the first 16 instrument projects, this was recognised as an important development.

Representatives from the ESS Data Management & Software Centre (DMSC) also made presentations in several parallel sessions highlighting their network of in-kind partners, and the necessity for close, individual collaboration between instrument teams and software developers. Through the EU’s SINE2020 program, which is holding its kickoff meeting this week in Copenhagen, DMSC will lead a raft of partners in a Joint Research Activity (JRA) to develop a pan-European, modular, interoperable analysis software suite. The discussions made it clear that business should soon be booming for the Copenhagen-based staff, with instrument teams beginning to establish requirements for software and data analysis.

Other neutron technologies and science support systems teams also used the two-way sessions to assess instrument needs, provide reference documentation, and, as always, to identify more in-kind partners for their work packages. The planning and specifications for sample handling and user labs were presented as “well-developed”, identifying ISIS in the UK as a major in-kind partner, but noting that the group is still working to identify more partners to get the labs operating in time for first neutrons in 2019.

The SAC met on September 28-29, and a full report is forthcoming; the European Spallation Source ERIC Council will meet October 21-22; and the ICB meets again on December 4. IKON10 will be held in Dusseldorf in February, and is being organised by ESS partner institution, the Jülich Centre for Neutron Science.