In the following years, the early meetings attracted colleagues from American and Austral-Asian facilities and very enthusiastic collaborators participated in a series of workshops organised in Europe and then overseas: at PSI (Switzerland) in 2001; ISIS (UK) in 2004; IPNS (USA) in 2006; ILL (France) in 2008 and FRM II (Germany) in 2010. The number of participants expanded to almost 100 as the European teams began working together within the framework of Joint Research Activity projects financed by the European Commission. 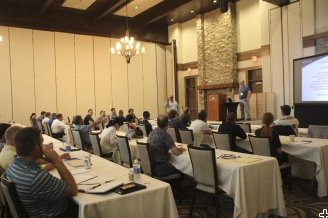 Cryogenics and He recycling Fig. 2.: As usual, discussions were lively and topics very varied. Here, we see Arno Hiess (ESS, Sweden) chairing the session on Cryogenics and Richard Down (ISIS, UK) answering questions on He recycling.

The 8th workshop, hosted by the ISIS Facility at Eynsham Hall (UK), was the first to be organized under the auspices of the ISSE. It brought together 93 participants from 15 scattering facilities affiliated to 10 countries that made this event truly international and the largest to date. As usual, the relative isolation of the venue encouraged informal technical and scientific discussions that continued well after the official program ended and well into late nights. The first ISSE School took place a year later at the ISIS Facility with great success: the maximum number of 20 participants was attained a few hours after the opening of the registrations! 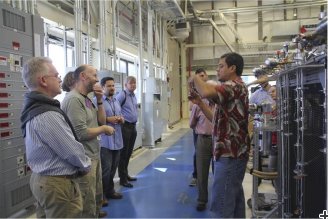 Organised by the NCNR and hosted by the University of Maryland, the 9th occurrence was titled the International Workshop for Sample Environment at Scattering Facilities and took place at Liberty Mountain Resort, Gettysburg, PA (USA) from the 19th to the 22nd of September 2016. 75 scientists, engineers and technicians from 10 countries and representatives from 10 sponsoring companies attended (Fig. 1). The workshop technical session opened with updates of neutron and X-ray facilities to help newcomers from China, Korea and the USA to get an overview of the community and encourage discussions on sample environment priorities at scattering facilities. Subsequent sessions focused on robotics, cryogenics (Fig. 2), high-pressure and gas-delivery systems, in-situ chemistry, magnetic and electric fields, and soft matter environments. The ISSE Committee for Standardisation also presented a draft of the Sample Environment Communication Protocol (SECoP) that aims to simplify the development, installation and exchange of equipment across facilities.

At the end of the workshop, participants got the opportunity to visit the NIST Center for Neutron Research (Fig. 3) and the museum of the Gettysburg National Military Park. They got an excellent introduction to the Battle of Gettysburg followed by a VIP tour of the Cyclorama, the US nation’s largest painting that places visitors in the fury of Pickett’s charge on the third day of the battle. Lively but peaceful discussions took place on the technical evolution of arms and in particular ways to control bullet trajectories, before dining near the 11 exhibit galleries of this museum of the American Civil War.

Following Colin Carlile’s invitation, participants were encouraged to write the articles that are now gathered in this special issue of the Journal of Neutron Research. This is another significant step forward in expanding the knowledge and expertise sharing for the sample environment community that consists of almost 150 members that actively exchange tips and tricks and discuss the latest developments on the ISSE website forums.

In November 2017, the NCNR will organise the 2nd edition of the technical school with a particular focus on soft matter environment related activities. The year after, probably in September 2018, HZB will host the next ISSE workshop with the aim to increase the participation of the X-ray community.