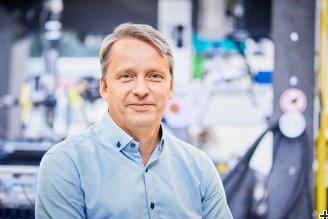 Since January, Prof. Dr. Martin Müller has been the new director at the Heinz Maier-Leibnitz Zentrum (MLZ), succeeding Prof. Dr. Stephan Förster in the role. A materials physicist, he now represents the Helmholtz partners Forschungszentrum Jülich (FZJ) and Helmholtz-Zentrum Geesthacht (HZG) in the Scientific Directorate of the MLZ. By rotation, Martin Müller will also be the spokesman of the directorate for a period of two years.

Martin Müller’s fascination with neutrons goes back to the time of his PhD thesis at the Christian Albrechts University in Kiel, where he worked on quasielastic and elastic neutron scattering. After years of research at the Institute Laue-Langevin (ILL) and at the European Synchrotron Radiation Facility (ESRF) in Grenoble, he joined the Helmholtz-Zentrum Geesthacht in 2008 where he now leads the Institute for Materials Physics with both synchrotron radiation and neutrons, and works on materials science issues with the GEMS user platform. “My research interests also include biological materials such as wood, silk, and chitin,” says Müller. Getting to the bottom of the special properties and structure of these substances is what drives him as a scientist. “Not just sitting in a small lab, but working on scientific instruments all over the world with good ideas and thorough preparation has always excited me,” the 53-year-old explains to show the appeal of neutron research.

Particularly important for Müller is the collaboration of European neutron researchers, which he also intends to promote in his new role as MLZ director. “I hope to link the MLZ even more closely with the European neutron landscape – in particular through LENS,” Müller says. Looking ahead to this goal, Müller has become involved in the German delegations of the ILL Steering Committee and the ESS Council (steering committee of the European Spallation Source, ESS) for the future development of neutron research in Europe.

Prof. Müller praises the work of his predecessor Prof. Dr. Stephan Förster, who managed to be present both at his home institute, Forschungszentrum Jülich, and the MLZ in Garching. “I would like to take up his approach directly”, Müller explains. The fact that his start in the MLZ directorate has had to take place under Corona conditions is, according to him, a challenge and an opportunity at the same time. “Since most of the meetings right now are via video conference, I want to take advantage of that and purposefully attend a lot of MLZ events.”

At the same time as taking on his new role as MLZ Director, he also takes over from Prof. Dr. Peter Müller-Buschbaum as spokesman for the entire Directorate. “I would like to work towards further strengthening the internal cohesion of the MLZ partners and expand their joint role in the European neutron research community,” Müller summarizes.