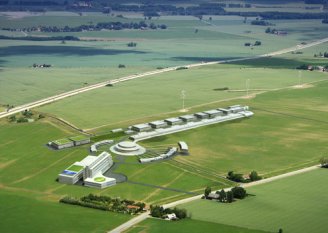 When built in 2019, the European Spallation Source will be one of Europe’s largest science facilities. Currently, 17 European countries are planning to build the ESS facility, which will be the world’s brightest facility for advanced materials research and life science with neutrons.

The conference “Science & Scientists at ESS”, held on 19-20 April in Berlin, Germany, was the largest in a series of conferences, meetings and workshops with the aim of asking European scientists what science they want to do at the future ESS. Today, neutrons are used for advanced studies on the molecular level within a wide variety of scientific disciplines. The details of the science that will be done at the ESS will be decided over the coming years, based on the input that will be given by the science community over the next few years.

In the conference, a large number of ideas for future scientific and instrumental opportunities at ESS were presented.

- The conference shown an impressive breadth in scientific and instrumental ideas, says Dimitri Argyriou, ESS Science Director. We have taken part of many, many scientific topics and valuable, innovative ideas that will be fed in the ESS science planning.

- I am very happy to see that such a large number of scientists are keen to contribute to building experimental opportunities and scientific communities around the ESS, especially considering the very early stage in the ESS project. Scientists are not only waiting passively for ESS to open in 2019, but are engaging already now, says Dimitri Argyriou. 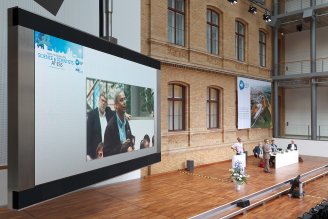 At the conference, feedback from more than 1000 scientists was channeled into the ESS project. Around 70 poster presentations, each made by a group of scientists, were made on instrumental possibilities enabling new science, and around 30 poster presentations on scientific opportunities that ESS would give. Feedback was also given from several scientific symposias on future scientific opportunities at ESS, in which more than 700 scientists had taken part.

- Germany has the world’s largest neutron user community, and therefore has a particular interest in the ESS project. It is self-evident for Helmholtz-Zentrum Berlin to take a very active participation in the ESS project, says Anke Kaysser-Pyzalla, Scientific Director of HZB.

The conference is arranged with Helmholtz-Zentrum für Materialien und Energie, Berlin, as local organizer. HZB operates one of the two neutron sources in Germany, and is one of the partner laboratories taking part in the project planning and design of the ESS facility. Several German research institutes, universities and laboratories are taking active part in the design and construction of ESS.

The European Spallation Source (ESS) will be a multi-disciplinary research laboratory based on the world’s most powerful neutron source, and it will be built in Lund in southern Scandinavia. ESS can be likened to a large microscope or an X-ray machine for molecules, where neutrons are used instead of light to study materials – ranging from polymers and pharmaceuticals to membranes and molecules – to gain knowledge about their structure and function. ESS will be 30 better than existing facilities, opening up new possibilities for researchers in for example health, environment, climate, energy, transport sciences and cultural heritage.

Currently, 17 European countries take part in the project planning, and will be the future owners of the ESS facility. The project planning is done in collaboration with a large number of international research institutes, universities and laboratories.

Construction is expected to start in 2013, the ﬁrst neutrons to be produced in 2019 and the facility to be fully operational around 2025. ESS is expected to support a user community of at least 5000 European researchers. Near by there will be complementary laboratories, such as the synchrotron MAX IV in Lund and XFEL and PETRAIII in Hamburg. The realisation of ESS will serve to further establish and strengthen Europe’s role as leader in the field of neutron-based research.