Mourning for pioneer of ultracold neutrons 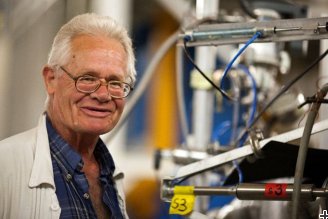 Albert Steyerl Albert Steyerl at the age of 73 years while experimenting at PF2 of the Institut Laue-Langevin. Credit: Misha Lasakov

He never liked to be the centre of attention and yet everything revolves around him one last time: Prof. Dr. Albert Steyerl, the inventor of the neutron turbine, died on 2 May at the age of 81.

Already in the grammar school of his birthplace, Munich, his classmates nicknamed him “EinSteyerl” because of his arithmetic skills, reports his later doctoral student Dr. Erwin Gutsmiedl from the Technical University of Munich. After studying mechanical engineering at the then Technical University of Munich, the 24-year-old Albert Steyerl moved to the Massachusetts Institute of Technology (MIT) in the US, where he earned his doctorate in mechanical engineering. At MIT he met his future wife Nagako, whom he married in 1966, back in Munich. The couple had three children: Ken, Hito and Anton.

Albert Steyerl’s career took him to Garching to the then already famous Heinz Maier-Leibnitz. Albert Steyerl became his doctoral student and Maier-Leibnitz was clever enough to set the mechanical engineer Steyerl on a hitherto unsolved problem of nuclear physics: slowing down fast neutrons from nuclear fission in such a way that they could be locked up in bottles and the nuclear particles themselves could be examined. Steyerl pursued and built two solutions at the Atomic Egg in Garching: a 13-metre long, vertically ascending beam tube based on Maier-Leibnitz’s idea. Here the neutrons should lose speed in height. The second idea, which Albert Steyerl himself came up with, finally led to the breakthrough. He developed a neutron turbine with blades to slow down the fast neutrons. For this invention, the 36-year-old was awarded the Physics Prize of the German Physical Society in 1974 and simultaneously habilitated at the Technical University of Munich (TUM). Not only was the apparatus, henceforth named the “Steyerl turbine”, spectacular, but also the measurements that Steyerl made possible for the first time on the atomic egg: he stored the short-lived neutrons in a bottle. This allowed long observation times and thus measurements of the fundamental properties of neutrons with previously unattained accuracy. Steyerl became a professor at the Physics Chair E21 of the TUM. He devotedly took care of his students. “Albert Steyerl was one of the old school: He was good at arithmetic and had a flair for experiments,” says Gutsmiedl.

He perfected his invention in 1984 in the neutron turbine at the high-flux reactor of the Institut Laue-Langevin in Grenoble, France. The Steyerl turbine in Grenoble was the Mecca of research with ultracold neutrons for more than a quarter of a century and is still competitive today. Scientists carried out groundbreaking basic experiments here, such as the search for an electric dipole moment of the neutron and measurements of the lifetime of a neutron with an accuracy of one second.

When Steyerl moved to the USA with his wife and youngest son in 1988 and became professor of physics at the University of Rhode Island, he was already one of the internationally recognised “popes for ultracold neutrons”, said Gutsmiedl.

Book and last publication will be published posthumously

In 2019 he learned of his serious illness. Instead of retiring, he planned his last months to get as much work as possible done, reports son Ken Steyerl. Albert Steyerl completed his book “Ultracold Neutrons”, which will now appear posthumously in June, as well as a publication on ultracold neutrons in magnetic bottles, which he submitted four weeks before his death.

Together with more than 150 scientists, engineers and technicians, Dr. Peter Geltenbort, who was in charge of the Steyerl turbine at ILL for 27 years, expressed his condolences in a letter to the family: “The news of your husband and father’s death has hit and touched us researchers with ultracold neutrons around the globe. Albert will be missed by our community, but we will cherish his memory and look after his legacy.