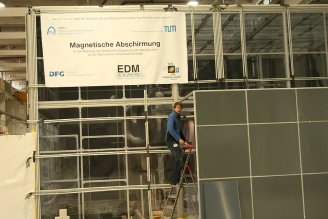 For the measurement of the electric dipole moment of the neutron at the Research Neutron Source Heinz Maier-Leibnitz (FRM II) in Garching, the research group of Prof Peter Fierlinger from the Excellence Cluster Universe at the Technische Universität München (TUM) and the Physikalisch-Technische Bundesanstalt Berlin are provided with 3.45 million euros. In addition, the measurement of the lifetime of the neutron by the research group of Prof Stephan Paul from the TUM is funded with 1.25 million euros. Prof Stephan Paul is also head of the priority program “Precision experiments in particle and astrophysics with cold and ultra-cold neutrons”, under which the projects are being financed.

Both high-precision experiments require extremely slow, so-called ultra-cold neutrons (UCN). A UCN source is currently being constituted at the Research Neutron Source Heinz Maier-Leibnitz (FRM II) that will allow up to a thousand times higher densities of these particles in the experiment and thus be the strongest source of ultra-cold neutrons in the world.

A small but measurable electric dipole moment of the neutron would provide, among other things, an explanation why so much more matter than antimatter has remained after the Big Bang. An international collaboration of experts from various disciplines is preparing a unique experiment realizing an accuracy of a hundred times better than previously known. As in the collider experiments at the Large Hadron Collider (LHC) at CERN, the physics beyond the Standard Model of particle physics will be tested, but with complementary approaches.

Also by using ultra-cold neutrons, the research group of Prof Paul will re-determine the lifetime of the neutron with unprecedented accuracy. Free neutrons decay after about 15 minutes, but this value is only inaccurately known so far. A precise knowledge of the neutron’s lifetime is of great importance to particle physics and plays a major role in the understanding of element formation in the early universe.

“High-precision experiments with ultra-cold neutrons are an important research field that complements accelerator experiments,” says Prof Stephan Paul. “The DFG support is a sign of the excellent research funding in Germany.” The funding will be used to develop advanced measuring equipment and to support young scientists.