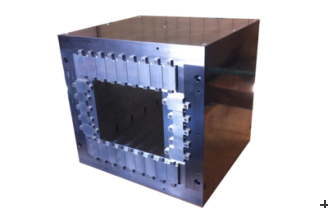 The ILL has now implemented the best neutron polariser in the world – it is more compact and cheaper than others because of its size and able to reach nearly 100% polarisation. It is set to be implemented at a number of facilities in the world to create better particle physics experiments to improve our understanding of the Universe.

Neutrons are special because they have magnetic dipoles but zero electric charge, which make them great tools for study. Unpolarised neutrons consist of an equal mixture of “spin-up” and “spin-down” components, while polarised neutrons are predominantly arranged in one direction.

In materials science, polarisation has been used to understand the magnetic behaviour of exotic compounds. In elementary physics, polarised neutrons have helped shed light on fundamental scientific problems such as the interactions described in the Standard Model. In particular, polarisation is important for the exploration of the unitarity of the Cabibbo-Kobayashi-Maskawa (CKM) matrix – which keeps track of quark weak-decay. In fact, polarisation is necessary for around half of all neutron experiments conducted at the ILL.

At the ILL, the PF1B polarised cold neutron facility is used for experiments in elementary particles and nuclear physics. It has provided the strongest polarised and unpolarised cold neutron beam in the world since its conception. Yet, as technology advances, the ILL needs to constantly improve its cohort of instruments.

The existing polariser at PF1B was built in 2002 and was able to reach up to 98.5% polarisation – the highest at the time. Only a special configuration of two polarisers in a so-called ‘crossed geometry’ – where two polarisers were assembled perpendicular to each other – was able to exceed this record at 99.7% polarisation, however this sacrificed a major fraction of neutron intensity. After 15 years of successful exploitation, these polarisers have been significantly damaged due to radiation from neutrons and, as such, showed decreasing polarisation and transmission.

A new polariser design published last year in Review of Scientific Instruments, based on a concept proposed by ILL scientists, has now been fully implemented into PF1B. Building on the ILL’s existing excellence in polariser technology, the team managed a three-fold approach to bring ILL’s abilities to new heights, through materials, geometry, and assembly.

Solid-state polarisers are traditionally made with “stacks” of thin single-crystal wafers, coated on both sides with a supermirror (SM) coating. Such wafers act as a spin-dependent neutron guide for incident neutrons, whereby most of the neutrons with one spin direction are reflected and those with another are absorbed. After one to three reflections by the SM coating, only one spin component survives, making the transmitted beam highly polarised.

“We have exploited the properties of such supermirrors and substrates to further improve our polarisers,” says Valery Nesvizhevsky, Instrument Scientist at the ILL. “The use of single-crystals for the substrate is important to minimise scattering. In the traditional design, the substrate was made of silicon, but due to the low optical potential of the material, some neutrons with low perpendicular velocities and a “wrong” polarisation are totally reflected. Instead, we found that using a sapphire substrate eliminated this total reflection regime and allowed us to significantly improve the overall polarisation.”

Sapphire is also a very strong material and able to withstand the mechanical manipulations needed to make a stack. Due to the technology of solid-state polarisers, the whole device can also be made much smaller – 10 times smaller than the previous polariser – and an external magnet could be implemented to apply very large magnetic field. This mitigates the second cause of depolarisation, where the neutron spin can sometimes flip upon reflection.

The researchers adopted an alternative geometry: the V-shape bender, where two stacks are tilted at a small angle and shaped into a “V”. Developed quite early on in the timeline of neutron polariser development, the V-shape bender has recently been joined by other geometries, like the original cross-geometry bender used at PF1B, and other popular “S” and “C” shaped benders.

The V-shape geometry has many advantages, namely that it is much simpler to assemble. The construction process could be streamlined, and as each stack is independent of each other, researchers can control the optics of the experiment set-up in situ. This adaptability means that it will be possible to control the main characteristics of the polariser depending on research requirements.

The final step was the precise assembly of the plates. Dr Alexander Petoukhov, Scientist at the ILL, describes this process:

“In an ideal polariser, all the plates in a stack are perfectly parallel each other – but in practice this is not the case. Even small dust particles falling between the plates can affect their positions relative to each other. Such errors will accumulate with the increase of the number of substrates, leading to the degradation of transmission and polarisation. To avoid this problem, we have developed a special technique to control the positioning of each plate in the stack with a precision of greater than 0.1 degrees.”

A prototype of the adaptable V-bender was produced and tested against simulated results, and was found to be in high agreement. The final result is an improved polarisation of up to 100%. The transmission performance has also improved, and the device will be free from radiation damage and activation issues in the future.

“This is the last stage of the development – the polarisation efficiency is 100% and there is not much else we can do. It is very possibly the best polariser we can produce today,” says Nesvizhevsky.

This improved performance has also attracted the interest of researchers across the world. For example, there are plans to implement the design in laboratories in North America.

“We were intrigued by this idea from ILL” says Dr Stefan Baeßler, Associate Professor at the University of Virginia, who is planning an experiment at the Spallation Neutron Source at Oak Ridge National Laboratory.

“Usually, when designing a supermirror polariser for a cold neutron beam, you need to choose between optimum transmission and very high polarisation – with the new device, we can have both. My student has proposed a device following the same idea which helps us develop a much better experiment.”

The new polariser has now been fully characterised and implemented into PF1B. It is used for research since August 2020 and will be available for proposals in the next reactor cycles.