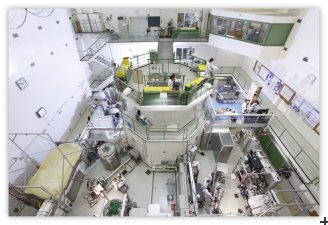 Some 10 years ago, Johannes Gutenberg University Mainz (JGU) entered a new field of research by starting to generate ultracold neutrons (UCN) for use in fundamental research in physics. The participating physicists and chemists now report another major breakthrough. They have been able to increase the UCN yield of their source by a factor of 3.5. This means that the prerequisites are now in place to begin the more sensitive measurements required to determine the lifetime of the free neutron.

Neutrons do not normally exist in a free state, but are instead bound as neutral particles within the atomic nucleus. Free neutrons are unstable and decay with a lifetime of approximately 15 minutes. The TRIGA Mainz research reactor can generate thermal neutrons, which, once brought into contact with solid deuterium at roughly minus 270 degrees Celsius, are slowed down so that they travel at approximately five meters per second. At this velocity, free neutrons can be stored and used in experiments. Scientists involved in fundamental research are particularly interested in determining the properties of these free neutrons, especially their lifetime and electric dipole moment, by means of highly accurate measurements. These have recently been supplemented by experiments to determine the electric charge of the neutron. “The limiting factor in all these experiments and measurements is dictated by the density of ultracold neutrons we can achieve,” explained Professor Werner Heil, one of the scientists at the UCN facility of Mainz University.

Scientists all around the world are currently developing new UCN sources. The Mainz TRIGA reactor can generate neutrons in pulse mode operation, which means that the reactor is pulsed every five minutes and thereby delivers a high neutron flux. After decelerating these neutrons using a block of solid deuterium, they are passed through a neutron guide, similar to a fiber-optic cable, for use in experiments outside the biological shield of the reactor. Besides the source upgrade, the infrastructure has also been further improved. The installation of a helium liquefier directly on site provides for more effective cooling of the deuterium crystal and creates excellent conditions for experiments to be run over long time periods. The neutrons from the reactor are transported to the site of experiments via electropolished stainless-steel tubes with an extremely smooth internal surface that prevents neutron losses. These tube inner walls have now received a new coating of a nickel-58-molybdenum alloy to further enhance their performance. 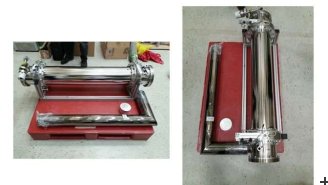 The scientists have succeeded in storing 8.5 UCN per cubic centimeter. “Compared to our previous results, we were able to increase the UCN yield by a factor of 3.5,” said Professor Norbert Trautmann of the JGU Institute of Nuclear Chemistry. The storage vessel employed was a standardized stainless-steel cylinder, specially supplied by the Paul Scherrer Institute (PSI) in Switzerland for normed measurements. This vessel used for a comparative study of ultracold neutron sources in operation has a volume of 32 liters, which corresponds to typical storage vessels for UCN experiments. This setup is generally regarded as the most reliable way of undertaking the corresponding measurements. A density of 8.5 UCN per cubic centimeter puts Mainz in the premier league in this respect. “We are now fully competitive with the world’s leading institutes in the field,” stated Heil.

“The increased UCN density is particularly important for lifetime experiments, which should start soon,” said Professor Tobias Reich, head of the JGU Institute of Nuclear Chemistry, which accommodates the TRIGA reactor.

Thanks to the improved performance, the scientists are confident of achieving an enhanced experiment quality in a much shorter time. Exactly determining the lifetime of the free neutron is of major interest, because the two commonly used methods, i.e., storing UCN in material vessels and the neutron beam method used to detect decay products (protons) in flight, yield different results. This may be due to either unrecognized systematic errors or to possible exotic decay channels, an indicator for physics beyond the Standard Model.

The UCN measurements were carried out using beam tube D of TRIGA Mainz. This source is mainly operated in pulse mode and is also available to external users. “For future experiments, such as lifetime measurements, we will be able to utilize the source in double-shift operation for three weeks from 8 a.m. to midnight,” added Dr. Christopher Geppert, manager of the TRIGA Mainz.