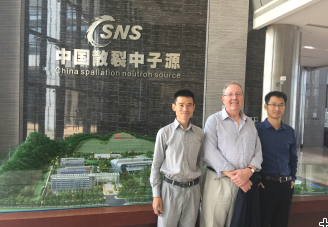 Professor Littlewood gave a report entitled “Controlling the Mott Transition in Oxides by Tuning the Elastic Coupling”. He introduced the metal-insulator transition driven by strong electronic correlations, which is generically called the “Mott” transition and is usually described entirely by electronic Hamiltonians, with models designed to exhibit related emergent phenomena such as magnetism and superconductivity.

He also reported his latest research founding: A very important class of transition metal oxides – the perovskites – can be thought of as an array of tethered octahedra where the Mott transition produces a shape-change in the unit cell. Coupling of the fundamental order parameter to octahedral rotations gives rise to large entropic effects that can shift the transition temperature by hundreds of degrees K, essentially by exploiting the physics of jammed solids.The insight might offer ways to make better refrigerators by enhancing electro-caloric and magneto-electric effects. More than 20 CSNS researchers attended the forum.