Optimised for brightness. In April, tests were conducted at the J-PARC spallation source in Japan that have preliminarily validated the physics behind the innovative ESS “flat” moderator. This design is expected to increase neutron brightness at ESS for some instruments by up to a factor of three.

TOKAI and LUND — On April 10-12, the European Spallation Source (ESS) Target Division, in collaboration with physicists from the state-of-the-art neutron source at the Japan Proton Accelerator Research Complex (J-PARC), carried out a basic set of experiments to establish the neutron brightness of moderators on two beamlines at J-PARC’s Materials and Life Sciences Experimental Facility (MLF). The measurements, still to be formally analysed, appear to give preliminary empirical confirmation that ESS’s optimisation of its 2013 baseline moderator design will produce 2.5-3 times more neutrons for those instruments at ESS able to exploit this brightness. The new 2015 baseline design is a major step forward in neutron moderator design, and has large implications for neutron science at ESS. 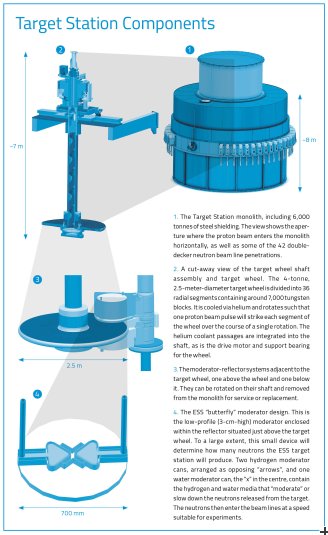 The optimised design, which was developed in a series of iterations over the last two years, is referred to as “2-dimensional” because the vertical dimension is flattened to a slim 3 cm, from the original 13 cm height. The result is a “flat” moderator that releases more neutrons in an evenly distributed pattern across a smaller area than the earlier design. Aside from the possibility of more efficient neutron extraction, the new geometry of the ESS moderator will require smaller beamline penetrations—an additional factor behind the increased brightness for the facility.

“Since the phenomenon was only anticipated by a calculation, and it was never tested by a real observation, it was a really essential process to test the calculation by executing a real experiment,” explains Masatoshi Arai, who was the director of MLF at J-PARC until March of this year and is now a Technical Coordinator at ESS. “J-PARC is the only place to test the phenomenon.”

2012: ESS moderator based on J-PARC design
J-PARC’s MLF is a short-pulse neutron source with a mercury target that uses three different moderator types to reduce the speed of the neutrons released from the target so that they may be most effectively used by the scientific instruments. One of these moderators is a coupled moderator, so called because there is no intervening absorber between the moderator and the reflector system, resulting in full-throttle neutron brightness.

MLF improved on previous coupled moderator designs by enhancing the moderator’s volume in combination with using liquid para-hydrogen as cold moderator material. Their cylindrical, high-intensity “volume” moderator, which uses a beryllium-based reflector system, was the model for the ESS baseline design in the 2013 Technical Design Report (TDR). 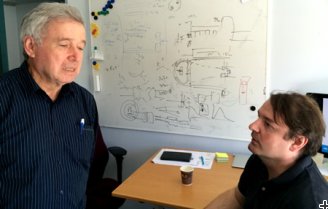 Former ESS Technical Director, and a current Technical Coordinator at ESS, Ferenc Mezei, described the origins of the ESS moderator design process this way: “We didn’t have the time in 2012 to begin a new search. So what we did was to take the best available practice. The best practice was this Japanese volume moderator. We went through the design process following this example. The reason we had to do that is because by 2013 we had to demonstrate feasibility and have a design that was good enough to make a reliable enough cost estimate for project preparation. After completing this work, we cautiously left ourselves a year to see if we could do better than best practice.”

2013: One year to optimise
The optimisation work by the ESS Neutronics group began on the basis of a conjecture by Mezei to optimise the moderator surface brightness for a hypothetical neutron source without any beamline. “Okay, we have this cylindrical volume moderator of this diameter and this height—let’s look at all possible sizes,” explained Mezei. “And then with enough computing power, we figured it out. It was a real surprise how far the optimal moderator shape and dimensions fell from the common practice.”

The next step was to turn the findings for the simplified model into a practical design for a real source with beams. The J-PARC coupled para-hydrogen moderator design calculations, made over a decade ago, revealed a remarkable feature in the case of a box-shaped moderator with a 10 cm height: the brightness levels at the top and bottom of the moderator were about twice those at the centre. This appeared to be related to the trends found in the ESS optimization work.

“Neutronics scientists in the ESS Target Division,” notes Arai, “were very interested in this intensity enhancement at the moderator rim.”

“What can be done at ESS in one week or two weeks cannot be done anywhere else. This is where the new science is.” 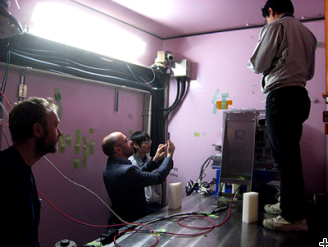 2014: From a pancake to a butterfly
A simplified theory by Mezei suggested that this brightness at the boundaries of the moderator could be concentrated into a smaller area through an alteration of the moderator’s geometry—its size and shape. This in turn would allow opportunities for more efficient neutron extraction. It was, however, not known how best to structure the device.

“Before the simulations, it was not obvious how to optimise for brightness,” says ESS Neutronics Group Leader Luca Zanini. Zanini’s team ran a series of software simulations at the ESS Data Management and Software Centre (DMSC) in Copenhagen to test multiple permutations of multiple geometric parameters.

The data demonstrated that a lower-dimensional moderator—that is, a low-profile, flattened moderator—would produce a uniformly high-intensity distribution of neutrons across the surface of the device. While peak brightness was estimated at dimensions below 1.4 cm in height, it was decided in coordination with ESS instrument scientists that a height of 3 cm would give the highest brightness that could still be exploited by the greatest variety of instrument optics.

The result was a newly engineered flat disc moderator for ESS, which became known as the “pancake” moderator, a design established in 2014. Over the last several months the concept underwent further design optimisation by Target Division engineers and physicists, in close consultation with ESS instrument scientists, resulting in the 2015 baseline design. Due to the innovative shape of the para-hydrogen and water canisters in the interior of the flat moderator, it is now often referred to as the “butterfly” moderator. In the words of Deputy Head of the ESS Target Division Eric Pitcher, “Our pancake has become a butterfly.”

2015: The ESS/J-PARC experiment
It was now left to the Neutronics group to experimentally confirm the effectiveness of the design, something that could only be done indirectly using the existing moderator at J-PARC. Since it was impractical in terms of both cost and time to perform a full mock-up of the butterfly moderator, the only option was to confirm the control data—Monte Carlo simulations of the original J-PARC design—using the operational J-PARC moderator. As it happens, J-PARC had not yet had occasion to take such measurements of neutron brightness on their own moderators, so the proposed experiment would benefit both institutions.

“The idea was, let’s measure what they have and then we will know—if the physics principles are confirmed—that we can extrapolate the results to a lower dimension,” explains Zanini. “And then we can assume to a good confidence level that low-dimensional moderators will perform as expected.”

The experiment was designed and executed by a team of four: Makoto Teshigawara and Masahide Harada, two senior scientists from MLF who had a hand in the original J-PARC moderator design; Zanini from ESS; and Esben Klinkby, a nuclear physicist from ESS partner institution the Technical University of Denmark.

MLF’s BL04 beamline was set up like a pinhole camera, such that the neutron beam would pass through a 1 cm aperture in a sheet of cadmium, a metal opaque to thermal neutrons. As with a camera, the neutrons that had passed through the aperture would then register on the 2-dimensional detector and form an inverted image of the neutron-emitting moderator surface. The same experiment was also run on the BL10 beamline, which uses neutrons from a decoupled moderator, in order to set a control for detector calibration.

The resulting brightness map appears to validate the original J-PARC simulations of their coupled volume moderator, which in turn would confirm the physics behind the ESS flat moderator concept. 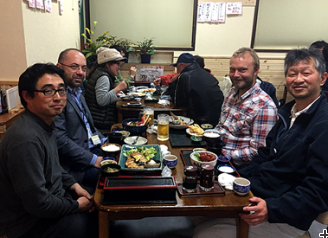 “Looking at this,” says Zanini in reference to the image, “it looks really promising because we see what we hoped to see. Now we need to do a more positive analysis based on our simulations, and this will take some time. Once this is finalised we think this will serve as a solid confirmation of the physics principles we used to design our moderator.”

The figure shows that the J-PARC moderator has two distinct neutron hot spots—one at its surface near the target and one at its far end, near the reflector. Should the data hold up to close analysis, it will confirm that collapsing these dimensions will, as Mezei speculated two years earlier, create a single hotspot resulting in a 3-fold gain in cold neutron brightness and a 1.5-fold gain in thermal neutron brightness over ESS’s 2013 TDR baseline.

2023: The impact
The new design, coupled to the 5 MW ESS accelerator, is expected to raise instrument performance at ESS relative to J-PARC by a maximum factor of 15. The impressive difference between ESS and existing neutron sources, and the 2015 design relative to the 2013 design, is best demonstrated visually: 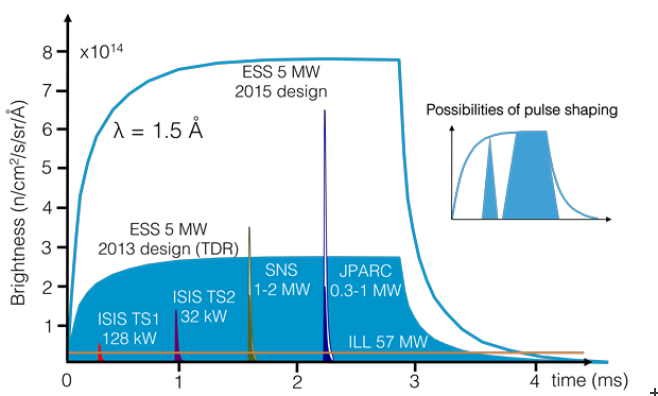 The moderator optimisation will not benefit every instrument at ESS to a corresponding degree, though it will result in increased flux across a wide range of instrument classes and experiment types. Work continues at ESS and its partner institutions on neutron extraction techniques and instrument beam guides that will also help determine to what degree the instruments are able to exploit the additional flux. For those instruments better served by a volume moderator, the ESS design includes a second, 6-cm-high moderator situated beneath the target wheel. This moderator benefits from the same “butterfly” geometry as the flat moderator.