Prof. Dr. Alan Tennant has been selected as the new Chief Scientist for the Neutron Sciences Directorate, at Oak Ridge National Laboratory. He will start in his new capacity there in November 2013. “We are proud to have had Alan Tennant working with us for these last nine years”, says Professor Anke Kaysser-Pyzalla, scientific director of the Helmholtz-Zentrum Berlin (HZB). 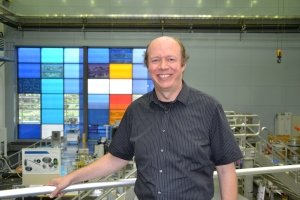 Tennant joined the former Hahn-Meitner-Institut (HMI) in 2004 as Head of the Magnetism Department and Professor of Physics at TU Berlin. He served in the capacity of Deputy Director of the Structural Research Division, and Director and Deputy Director of the Berlin Neutron Scattering Center prior to the merger of the former HMI with BESSY. After the foundation of Helmholtz-Zentrum Berlin, Prof Tennant served both as Speaker of the Magnetism Division and of the User Platform. Additionally he has headed the Institute for Complex Magnetic Materials M! ICMM and the Department for Magnetization Dynamics (MAMD).

Before moving to Berlin he held positions at Oxford University where he was the Keeley-Rutherford research fellow at Wadham College and the Rutherford Appleton Laboratory, and a faculty member at the University of St. Andrews, Scotland where he taught condensed matter physics. In addition, he worked two years at Oak Ridge National Laboratory in a post-doctoral condensed matter physics position from 1996 to 1998. While there, he received the ORNL Technical Achievement Award in 1997.

Prof. Tennant has received many awards including the the Europhysics Prize, Condensed Matter, 2012, and Science Magazine’s top 10 breakthroughs in 2009 for the experimental observation of magnetic monopoles using neutron scattering at the Berlin research reactor BER II. He has served on many panels and advisory boards including being the Speaker for In-House Research of the Photons Neutrons Ions (PNI) Program of the Helmholtz Association for the last 6 years. During his tenure in Berlin he initiated and played a leading role in the upgrade of the neutron facilities at BER II as well as undertaking a major role in the preparation and presentation of the POF II program. He has been scientific head of the High Field Magnet project since 2007 at BER II and hosted the VEKMAG project to build a high field vector magnet at BESSY II both of which will come on-line in 2014. More recently he led an international consortium of partners to the award of a Helmholtz Virtual! Institute on quantum and topological states which runs until 2017. In addition he has been organizing the highly successful Berlin Neutron School for the last 5 years extending it in scope and duration during this time.
In his new capacity Prof Tennant will be responsible for leading a strategic scientific vision for the directorate that will enhance and define the neutron sciences image at ORNL and around the world. Specifically, he will develop and direct the scientific user and instrument and neutron source development programs at both SNS and HFIR.

“Please join me in thanking Prof. Tennant for his work for Helmholtz Zentrum Berlin and wishing him all the best for his new position as Chief Scientist of the Neutron Sciences Directorate”, says Anke Kaysser-Pyzalla.