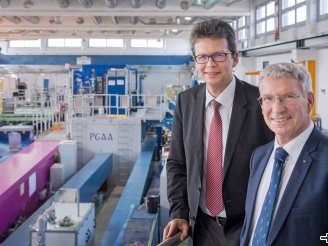 The world’s highest-performance neutron source for research, FRM II of the Technical University of Munich (TUM), will have a new Scientific Director as of April 1st. With the appointment of Professor Peter Müller-Buschbaum, an internationally renowned researcher has been appointed to succeed Winfried Petry.

“With the appointment of Prof. Peter Müller-Buschbaum, we have been successful in recruiting a globally recognized scientist in the field of polymer research and neutron scattering for the Research Neutron Source in Garching, which became very attractive to the international user community under his distinguished predecessor Prof. Winfried Petry,” states TUM President Prof. Wolfgang A. Herrmann.

Peter Müller-Buschbaum, born in 1966, studied physics in Kiel and Munich. His research activities took him to the Max Planck Institute for Polymer Research in Mainz, the Institut Laue-Langevin and to the European Synchrotron Radiation Facility (ESRF) in Grenoble.

In 2003, he qualified to lecture at the TUM Department of Physics, where he has been a professor since 2006. His field of expertise is the physics of thin layers, particularly polymer layers. His internationally acclaimed research lies at the interface between physics, chemistry and engineering, with renewable energy being a focal point of his work.

One Hundred Trillion Free Neutrons per Square Centimeter per Second

The research neutron source Heinz Maier-Leibnitz (FRM II), which has defined new safety standards, offers the highest usable neutron density in terms of thermal performance worldwide. Every second, it generates more than a hundred trillion free neutrons per square centimeter from uranium, which are used in a variety of different instruments.

Neutrons penetrate solid matter and thus help us gain deep insight into various materials. FRM II is indispensable in the production of radiopharmaceuticals for cancer therapies and research into new high-performance batteries. In addition to large-scale research projects in medicine, industry and science, dinosaur eggs have also recently revealed their secrets, and scientists in the “Ancient Charm” project have analyzed valuable sculptures to discover how they were made.

FRM II enjoys an excellent international reputation: Every year, around 1,000 visiting scientists from over 50 countries come to Garching to take measurements. In addition to TUM, several universities, institutes of the Max Planck Society, and Forschungszentrum Jülich as well as the Helmholtz Centers in Geesthacht and Berlin have conducted experiments in the facility. Since early 2013, this cooperation has been known as the “Heinz Maier-Leibnitz Zentrum” (MLZ).

Prof. Peter Müller-Buschbaum succeeds Prof. Winfried Petry, who was instrumental in setting up the research neutron source in 1995. Professor Petry designed the scientific instruments and has headed FRM II as Scientific Director since 2001.