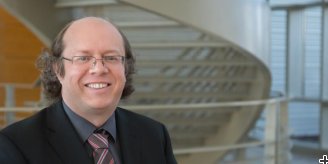 Alan Tennant Alan Tennant, the new director of the Joint Institute for Neutron Sciences at the Department of Energy's Oak Ridge National Laboratory.

Alan Tennant has been appointed director of the Joint Institute for Neutron Sciences at the Department of Energy’s Oak Ridge National Laboratory. The institute is a partnership between ORNL and the University of Tennessee, Knoxville.

“Neutrons are the future in characterizing materials, especially soft matter,” said Taylor Eighmy, vice chancellor for research and engagement at UT. “With Alan as director, we can begin to establish deep thought leadership at UT and ORNL in this growing field.”

Tennant assumes the directorship from Takeshi Egami, the founding director of JINS, who is stepping down after leading the institute for 11 years. Egami will remain as director emeritus as he continues to hold his distinguished scientist position at ORNL and teach at the university.

“I am grateful for Takeshi’s leadership as the founding director of JINS and I look forward to working with Alan as he continues to propel neutron science at the institute,” Eighmy said.

Tennant brings rich neutron science experience to his new role. Before conducting postdoctoral research at ORNL in the late 1990s, Tennant studied physics at the University of Edinburgh, Scotland, and earned his Ph.D. at the University of Oxford. He served as a professor at the Technical University, Berlin, and institute director in the field of magnetism at the Helmholtz Center Berlin.

During nine years in Berlin, he was science director of the Berlin Neutron Scattering Center and undertook research on exotic states of matter, including the observation of “nature’s ultimate symmetry,” the E8 symmetry, in a material using neutrons. He received the Europhysics Prize for the experimental observation of magnetic monopoles in spin ice in 2012.

Tennant returned to ORNL in November 2013 as chief scientist in the lab’s Neutron Sciences Directorate and will continue to serve in that role as JINS director.

At JINS, he will lead efforts in three distinct areas of importance to the missions of UT and ORNL:

Incubator science: JINS increasingly will bring together researchers from diverse disciplines to perform experiments that have never been done. It will be a platform providing researchers the tools needed to address the most demanding research problems, from health and biology to physics, materials, chemistry and engineering.

Staff development: The institute plays a key role in building scientific expertise in the use of neutrons and developing applications for JINS’s expertise and the world-leading scientific instruments available at ORNL.

“I was attracted to ORNL because of the co-location of world-leading materials, high-performance computing, and neutron programs in one center,” Tennant said. “I saw achieving the full potential of the High Flux Isotope Reactor and Spallation Neutron Source together as an exciting opportunity, and a chance to do something very new here. I’ve been working on reintegrating and making a science program by putting new kinds of innovation back into the whole approach we take.”

Tennant, who serves as a joint faculty member in UT’s Department of Physics and Astronomy, continued, “It isn’t only about engaging Ph.D. students, but faculty, too. JINS should be a place for both to come and learn more about neutrons, to hold workshops and courses. Science is moving very quickly, and our staff and faculty need to develop along with it. JINS provides a way for both ORNL and UT to engage and perform at the very leading edge of science. With this I think it’s possible to do absolutely groundbreaking research that might not happen otherwise.”