The right mix: Water and neutrons with Eugene Mamontov 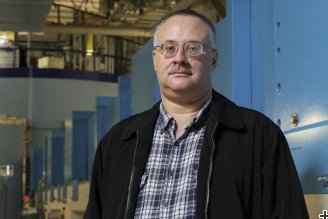 Eugene Mamontov’s background in both basic and applied science has made him a valued partner for scientists who come to the Spallation Neutron Source at ORNL in search of a better understanding of the water dynamics in their research—projects as diverse as studying plant cellulose or analyzing nanostructured membranes for desalination.

Mamontov is the lead instrument scientist for BASIS, the backscattering, crystal-analyzer spectrometer at the SNS that is particularly good at deciphering the dynamics of water in various systems.

“We predominately study hydrogen-bearing materials on BASIS, and many of them are water-related,” Mamontov said. “There’s a good reason we are so preoccupied with water. It is a molecule mostly made up of hydrogen, and it just so happens that neutrons are particularly sensitive to hydrogen, so the neutron scattering cross-section of hydrogen is huge. Therefore, if you have water in some matrix, even in relatively small amounts, you can still see that water with neutrons, where you couldn’t see it with x-ray scattering or other probes.”

The other factor making BASIS a good instrument for the research is its time scale. BASIS probes dynamic processes on the time scale from about a picosecond to about a nanosecond. Water molecules in various environments tend to perform diffusion jumps in that timeframe, Mamontov explained.

“We can study water in hydrated anything,” he said, including water in polymers, surface water on nanoparticles, water in nanostructured carbons and oxides, in biomaterials, in salts mixed with water, and even water in the hydrated eggs of brine shrimp—recounting one of his more unusual projects with aquaculture applications.

Mamontov might be involved in editing several papers at a time as scientists from ORNL and around the country travel for beam time on the SNS, a U.S. Department of Energy Office of Science User Facility. “We lead interesting lives here, with involvement in very diverse projects,” Mamontov said. Most recently he has been helping scientists study hydrogen in beryllium lithium hydrides for hydrogen storage systems; measuring living cells; and studying aqueous systems like brines that have relevance to storage of radioactive waste.

“We serve the community, and I may be working on four projects in a day that are totally unrelated to each other,” Mamontov said.

Mamontov grew up in the Russian countryside, and moved to Moscow for university, earning his M.S. in solid state physics from the Moscow Engineering Physics Institute. He came to America in the 1990s to pursue a Ph.D. in materials science and engineering at the University of Pennsylvania, drawn in part by the presence of renowned materials scientist Takeshi Egami on the faculty. Mamontov worked as a graduate student and postdoctoral researcher for Egami for a few years until Egami left to join ORNL and The University of Tennessee as the SNS was being constructed.

Mamontov then spent about three years as an instrument scientist for the NIST Center for Neutron Research, a joint position with the University of Maryland. He came to ORNL just before the SNS was coming online in 2006. Mamontov put the final touches on the BASIS instrument at the SNS and performed its first measurements.

After his time in Moscow, Philadelphia, and the Washington, D.C. metro area, Mamontov says he’s come full circle by moving a bit closer to the countryside in Oak Ridge and Knoxville. Away from the lab, Mamontov spends time with his family, including children in intermediate and middle school.

ORNL is managed by UT-Battelle for the Department of Energy’s Office of Science, the single largest supporter of basic research in the physical sciences in the United States. DOE’s Office of Science is working to address some of the most pressing challenges of our time. For more information, please visit http://science.energy.gov.