The SKADI Diffractometer: Enlarging the Field of Small-Angle Neutron Scattering

This is the fifth in a series of articles highlighting the instruments selected to enter Phase 1: Preliminary Engineering Design, for the European Spallation Source (ESS) suite of instruments. Twenty-two instruments are anticipated at ESS. The instruments in this series are expected to enter the ESS user program by 2023 and will address the needs of the ESS core user community. They have been selected through a rigorous but inclusive, community-based process that begins with an open call for proposals, moves through reviews by experts inside and outside ESS, and ends with a recommendation to advance into Phase 1 by the ESS Steering Committee. The full proposal and selection process is described here. 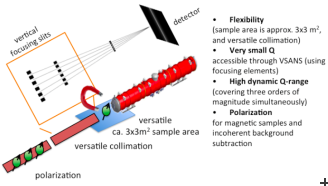 NEUTRON SCATTERING AT THE EUROPEAN SPALLATION SOURCE (ESS) will be one of the world’s most powerful tools for evaluating the structures and behaviors of materials across a wide range of length scales—from the atomic level, to nanoparticles, and up into the hundreds of micrometers. Small-angle neutron scattering (SANS) is a frequently used technique that enables experiments along the higher end of these neutron-resolved length scales. Allowing for simultaneous measurements of larger structural properties across three orders of size magnitude, ESS’s Small-K Advanced Diffractometer, or SKADI, will prove decisive in discoveries over the next half century across a staggering range of scientific disciplines.

The SKADI project is a German, French, and Dutch collaboration. The instrument was proposed by SANS expert and instrument builder, Dr. Henrich Frielinghaus of the Jülich Center for Neutron Science (JCNS) in Germany and his JCNS colleague, Dr. Sebastian Jaksch. Today, Frielinghaus serves as the project’s senior advisor, and Jaksch continues the work with research teams at the Laboratoire Léon Brillouin (LLB) in France and the Delft University of Technology in the Netherlands. The French group, headed by Dr. Jacques Jestin, will share in the construction of SKADI and provide the VSANS add-on technology. Dr. Wim Bouwman leads the Dutch group, which will supply SKADI’s SESANS technology.

“The much higher neutron flux of ESS compared to existing sources will enable SANS measurements to be done much faster, or much better, or on much smaller samples,” states Dr. Richard Heenan, senior scientist at the ISIS neutron facility in the UK, and chair of the ESS Scientific and Technical Advisory Panel (STAP) for SANS. “SANS can use most of the neutrons from each ESS pulse without needing elaborate chopper systems to throw many of them away,” he explains, “so the gain factors over existing sources are on the order of 20. Thus SANS is ideally suited to the nature of the ESS source. Even when ESS first starts up, at low intensity, its SANS will be world class.”

SANS can fully exploit the high flux of the ESS source owing to the technique’s relatively relaxed requirements on resolution. For data gathering with SANS, the more neutrons available, the more flexibility a researcher will have for an experiment. Feature-rich instruments that can capitalize on ESS’s high brightness and long-pulse beam structure are a must for the facility, where the anticipated needs of researchers a decade on need to be as broadly accommodated as possible.

“SKADI is part of an instrument suite where it will put forward certain features, which are not addressed by other SANS instruments [at ESS],” says Dr. Jaksch. “The distinguishing features in comparison will be high flexibility of the sample environment, the high resolution at small angles, polarization, and the high wavelength resolution, being the longest SANS instrument on site.” 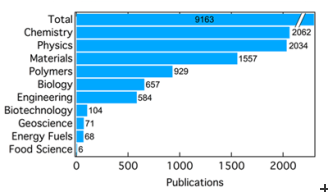 SANS publications 2000 - 2013 Statistics about SANS publications in the years 2000-2013 sorted by topics. It will be a task of SKADI to support the less well-presented topics in the near future. (SKADI Instrument Proposal)

A group of SANS researchers convened at ESS in 2011 to discuss requirements that would cover a full gamut of science cases. “I organized an advisory panel for small angle scattering and with it, we put together a strategy for what we thought a suite of SANS instruments at ESS would look like,” explains Dr. Andrew Jackson, the ESS coordinator for SANS, and lead instrument scientist for LoKI, SKADI’s complementary SANS instrument at ESS. “When we’re operating the user program, I very much hope it will be that users come with a science problem and the range of our SANS capabilities will allow us to direct them to the best instrument and configuration for solving that problem.”

At 55 meters in length, and with a maximum sample-to-detector length of 20 meters, the SKADI diffractometer will be the best instrument available for the study of structures and processes at the largest possible length scales for neutron diffraction. Before conducting an experiment, neutron scientists must identify the SANS instrument that delivers an optimal range of neutron wavelengths for their sample, a specification strongly influenced by the instrument’s length. In general, longer instruments are better suited to direct neutrons at smaller angles, which allows for the resolution of larger structures within a sample.

SKADI’s physical proportions, its large sample area to accommodate diverse in situ arrangements, and its dual, adjustable-length detectors ensure the instrument’s effectiveness for the broadest range of samples within the most refined conditions. The add-on technologies of polarization, very small angle neutron scattering (VSANS), and spin-echo small angle neutron scattering (SESANS) extend SKADI’s capabilities significantly. The user community anticipated for SKADI reaches across nearly the entire pantheon of materials science and biophysics research, and—thanks to the instrument’s ease of use—may expand SANS research opportunities for underrepresented fields such as energy and food science.

“The SKADI instrument will be a very flexible workhorse due to being able to adjust its neutron beam collimation and position its detectors inside a long vacuum tank to suit a particular experiment,” says Dr. Heenan. “Coupled with the time-of-flight neutron wavelength range of a pulsed source like ESS, this enables the size range studied within a set of samples to be optimized for each particular scientific experiment.” 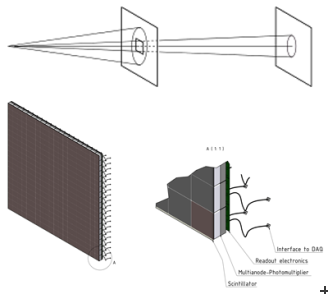 SKADI’s design includes two moveable detectors set in series within a 20-meter-long vacuum tube. The first of the two detectors is designed with an aperture in its center where neutrons traveling at lower angles pass through to the second detector. This arrangement allows for the detection of neutrons scattering along different vectors simultaneously, and thus the instrument’s unprecedented range of length scales revealed through a single experiment on a single sample.

The two-detector arrangement cuts down on measurement time because each measures a different range of Q values simultaneously, and the detector need not be repositioned for each measurement. It also enables fast kinetic experiments, where the sample is permanently changed once a reaction completes: researchers can get a single-shot, comprehensive measurement of scattering data from a sample that would otherwise be impossible to measure a second time at another angle. This means a researcher can monitor both the static structure and the processes that create that structure, a perspective vital for understanding chemical or biological processes.

A polarized beam option coupled to post-sample polarization analysis will allow SKADI’s users to direct the instrument’s strengths toward the detailed study of magnetic materials. “Polarization experiments are mainly for making magnetic structures visible,” explains Dr. Jaksch. “We have the example of Skyrmions, which are like small tornadoes made up of magnetic spins. They are really stable and only a few nanometers in diameter. So if you were, for example, able to manipulate them, it would be an immensely good opportunity to store data on high performance hard disk. The problem is we don’t know enough to actually use these Skyrmions yet.”

SKADI’s VSANS technique, which uses a multi-slit collimation setup, will allow for ten times smaller scattering angles, while its SESANS technique reaches for yet smaller angles. These methods increase the instrument’s resolution to microns and tens of microns respectively, allowing for analysis of materials at even larger length scales than standard SANS. Visualization at these larger scales is key to advanced research on colloidal systems such as industrial paint and sunscreen, products whose effectiveness relies largely on researchers’ ability to resolve their complex suspension structures. 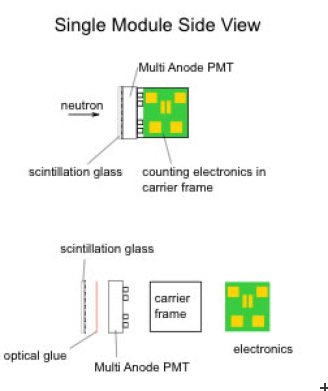 SKADI will also be adaptable to experiments requiring “real-world” sample environments and non-standard sample geometries by accommodating the heavy-duty equipment that enables them. By controlling temperature, pressure, mechanical strain, and electrical or magnetic fields, researchers can simulate, for instance, the extreme conditions found underground in order to study greenhouse gas (CO2) sequestration in rock structures, or apply magnetic fields to the nanoparticles that figure in the novel cancer treatment known as hyperthermia.

To take full advantage of the high neutron brightness of ESS, the SKADI team is working with ESS to develop a new solid-state detector type called SoNDe, an acronym for “solid-state neutron detector”, and also the German word for “probe”. The detector system combines modular photomultipliers, a well-known technology, with a lithium scintillation converter to detect neutrons with an estimated 80% efficiency. It also avoids the use of helium-3 technology, the industry-standard detection medium that is increasingly difficult to obtain.

“[For the detectors], the main trick is we are using quite small photomultipliers,” explains Dr. Jaksch. “At the moment, photomultipliers are generally around eight centimeters in diameter, and we can go down to three millimeters in diameter. The [neutron] counting capability of each photomultiplier roughly stays the same, so we gain a factor of 100 over this. In total, today what’s available is a maximum of, say, 2 MHz for counting on a one square meter detector. We might go up to 20 MHz.” 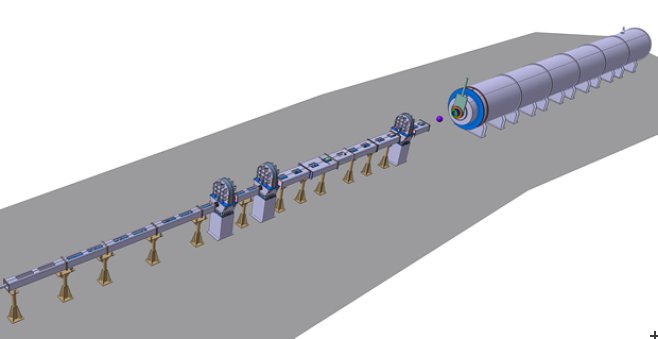 Layout of SKADI Layout of SKADI after the beam preparation, from the proposal. For clarity, shielding is omitted. From left to right: Slim and wide collimation with choppers at 11.5, 14.5 and 21.5 m, sample position (lilac sphere) and the detector tube.