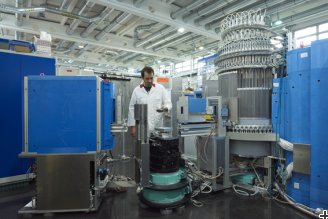 The new instrument KOMPASS was born on May 29, 2018, at exactly 15:16h. At that time, it detected the first neutrons, which were scattered from a sample.

The neighboring instruments J-NSE and N-REX happily welcomed the new three-axis spectrometer in the neutron guide hall west. To stay within the tradition of building instruments at the Heinz Maier-Leibnitz Zentrum, KOMPASS is far from being fully grown and will be, for example, extended by an analyzer. The two proud fathers, Dr. Dmitry Gorkov and Georg Waldherr, were present at the birth and are very pleased: “This is a great feeling – after a long time of preparation to see that everything works now properly,” says the instrument scientist Dmitry Gorkov. Since 2017 he has been working for the University of Cologne on KOMPASS. In 2015, Georg Waldherr was employed as technician by the Technical University of Munich, the second partner of KOMPASS. He has prepared everything so that the first neutrons can now reach the detector.

Now, Gorkov and Waldherr gradually put the instrument into operation. “We first measure in the simple diffraction mode,” explains Dmitry Gorkov. “After that, it is necessary to guide the neutron polarization via the monochromator to the sample and to the detector, to use the energy analysis in the secondary spectrometer arm and finally to install the spherical polarization analysis technique.” After the precise alignment of KOMPASS, first experiments to determine the magnetic order in the unconventional superconductors UGe2 and SrFe2As2 and on a frustrated magnetic system, Cs3Fe2Br9, have been conducted.

The name KOMPASS is an abbreviation for KOeln-Munich on Polarization Analysis Specialized Spectrometer. It is fed exclusively with polarized cold neutrons with energies 2 ≤ Ei ≤ 25 meV and is specialized for the investigation of complex magnetic structures and their dynamics. Expectations for the scientific achievements of KOMPASS are high. Typical systems, whose understanding by means of spherical neutron polarimetry at KOMPASS can be substantially extended, are all types of weak magnetic orders, complex (chiral) magnetic structures (e.g. rare earths, skyrmions), quantum magnetics, quantum effects associated with longitudinal magnetic excitations, quantum critical fluctuations, systems of reduced dimensions (e.g. thin films and multilayers), as well as multiferroics and magnetoelectric materials, high temperature superconductors and frustrated magnetic systems.

The construction of KOMPASS was funded by the Federal Ministry of Education and Research through the collaborative research project 05PK16PK1.