Three dinosaur eggs at the MLZ 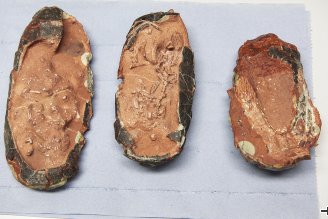 It is already known that dinosaurs lay eggs. The fact that the offspring of the same mother hatch at different times from the eggs, was observed so far only in modern birds. For the first time, measurements at FRM II could prove that already their ancestors, the dinosaurs, hatched asynchronously.

Thomas Engler and Tzu-Ruei Yang brought three dinosaur eggs to the FRM II research neutron source for measurements: they all come from the same nest found in 2006 in the Chinese province of Jiangxi. The find itself was already a sensation, because for the first time several eggs were demonstrably discovered from the same nest of the Cretaceous period. 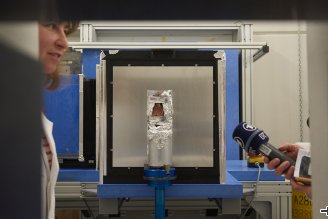 The two geoscientists of the University of Bonn hope to learn more about the embryos inside the eggs using neutron tomography on the instrument NECTAR. Their previous investigations with X-ray computed tomography and preparation techniques indicate that the dinosaurs of the group Oviraptosauria were at different stages in their development in the eggs. “This would be the first time we could prove that dinosaurs hatched asynchronously,” explains Tzu-Ruei Yang. So far it had been assumed that this feature developed only with the descendants of the dinosaurs, a branch of the birds. Dr. Malgorzata Makowska leads the measurements at NECTAR and will provide the geoscientists with high-resolution 3-D images of the bones of the embryos. “With neutron tomography, we can look inside the eggs non-destructively.”