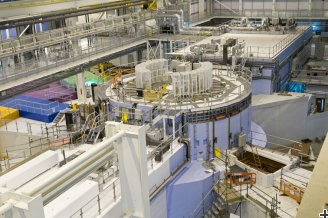 The UK’s ISIS pulsed neutron and muon source at the Science and Technology Facilities Council’s (STFC) Rutherford Appleton Laboratory, is now back in action after considerable upgrades over the last six months.

This world-leading leading facility, dedicated to gaining unique insights into the properties of materials on the atomic scale, is back online to schedule. STFC’s ISIS can once again welcome UK and international researchers wishing to use some of its unique facilities to answer the big questions of materials science.

Dr Philip King, Head of the ISIS Spectroscopy and Support Division, celebrated the restart saying, “The six month planned shutdown allowed us to undertake a variety of projects to improve the facility – including replacement of magnets and other essential components, changes to one of the targets producing neutrons and an upgrade of the muon beamline. The changes will result in new science areas being opened up for neutron and muon studies at ISIS.”

The changes to one of the neutron source target stations will ensure that two new instruments get the right sort of neutrons. The first, ChipIR, will be a dedicated facility to study the effects of neutrons on microelectronic circuits.

Dr King said, “Companies need to ensure that key microelectronic components aren’t affected by the passage of neutrons through them – important for systems in planes and cars, for example – and ChipIR will help them to do this.”

The second new instrument, Larmor, will extend the range of neutron experimental techniques available at the ISIS facility, and will enable measurements over new length- and time-scales.

ISIS is one of only four places in the world where muon studies are possible. The new components in the muon beamlines at ISIS will transport the muon beam more efficiently, providing at least double the number for muon experiments. They will be used in areas such as ion mobility in new battery materials, charge movement in organic semiconductors used for display screens and fundamental investigations into magnetism and high-temperature superconductivity.

“It’s great that we’re back up and running again”, added Dr King, “and we are looking forward to the exciting new science possibilities now available.”

ISIS is a world-leading centre for research in the physical and life sciences at the STFC Rutherford Appleton Laboratory near Oxford. Our suite of neutron and muon instruments gives unique insights into the properties of materials on the atomic scale.

We support a national and international community of more than 3000 scientists for research into subjects ranging from clean energy and the environment, pharmaceuticals and health care, through to nanotechnology and materials engineering, catalysis and polymers, and on to fundamental studies of materials.