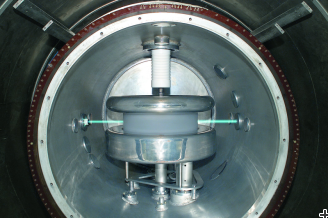 Since the start of its operation in 1985, the experimental installation ‘Physique Fondamentale 2’ (PF2) has been until recently the only user facility for ultra-cold neutron (UCN) research in the world. Ultra-cold neutrons play an important role in addressing key questions of particle physics at the low-energy, high-precision frontier, complementary to the high-energy frontier probed at particle accelerators. A peculiar property of UCNs is that their kinetic energy is so small that they can become trapped in material and magnetic bottles, hence are observable for long times.

Indeed, the lion’s share of experiments in this field of science has been performed on PF2 in the last quarter of a century. As a consequence, all scientific areas exploitable with UCN have been covered: the lifetime of the free neutron is not only of fundamental importance to determine key quantities of weak interaction with high precision, but also a key parameter to big-bang nucleosynthesis (BBN) models.

By searching for a non-vanishing electric dipole moment of the free neutron, new CP violating mechanisms are investigated. These are necessary to explain the matter-antimatter asymmetry in our Universe. Violation of charge conjugation parity (CP) symmetry means that the laws of physics are different if a particle is changed into its antiparticle while its spatial coordinates are mirrored.

Free neutrons are massive particles, electrically neutral, relatively long living and cold with respect to their environment. These properties make them an ideal tool for studying gravity at the microscopic level and fundamental neutron optics.

It is unsurprising then, that over the last 30 years since its inception, data generated on PF2 is still important today and leads to regular and steady publications in refereed journals. One most recent international study published in Physical Review X, is a great example of this. Excitingly, it has led to setting some of the tightest limits to date on the strength of interactions between axions (hypothetical elementary particle originally postulated to solve the strong CP problem) and gluons (exchange particles for the strong force) and nucleons.

The search for dark matter

It is generally accepted that only around 5% of the matter in the Universe consists of ordinary, visible matter, whereas the much larger remainder is invisible ‘dark’ matter (around 27%) and 68% ‘dark’ energy. What these missing components are made of remains one of the greatest mysteries of modern science. While the nature of dark matter is unknown, there do exist a number of limits, putting constraints on the energy and coupling ranges of hypothetical dark-matter particles. Most searches up to now have been focused on so-called Weakly Interacting Massive Particles (WIMPs). Searching for WIMPs typically involves the detection of either scattering or annihilation events (or, alternatively, the creation of WIMPs in high-energy collisions). Experiments along these lines have so far come out empty-handed. And so have searches for another class of candidate particles, the so-called axion.

Nobody has yet detected axions or axion-like particles – the only systematic searches to date for axions have looked for the conversion of axions to photons, typically in the microwave range (at GHz frequencies). However, in recent theoretical work new ways have been proposed to search for axion couplings to nucleons and the gluons, while theoretical work has shown that so-called ultralight axions in the nano-hertz range are viable dark-matter candidates. This motivated the nEDM collaboration at the Paul Scherrer Institute (PSI) and the Institute for Particle Physics and Astrophysics at ETH Zurich — to search for axions in the nano- to milli-hertz range, using the data taken in their experiment to measure a non-vanishing electric dipole moment of the neutron.

This approach meant not looking for rare single events (such as scattering, annihilation or conversion), but for a constantly oscillating axion-like background field that is predicted to interact with ordinary matter and could show up in harmonic oscillations in the electric dipole moment (EDM). Given that the effect would be extremely small, exquisitely sensitive experiments are needed to measure it.

The nEDM collaboration at PSI has collected high-precision data for the EDM of the neutron in a recently completed experiment. Measurements were conducted using an improved and upgraded apparatus previously employed at the ILL by the RAL-Sussex-ILL EDM collaboration between 1998 to 2002. Our experiment was a room temperature neutron EDM one using UCNs from the ILL reactor. The results of the measurement were published in 1999 giving an upper limit on the neutron EDM of 6.3×10−26 ecm. New measurements published in 2006 improved this to 2.9×10−26 ecm – the current world limit until now. “It’s the high quality of the data generated by our RAL-Sussex-ILL EDM experiment at ILL’s UCN source PF2 almost 20 years ago which enabled now a re-analysis with a different and new goal, namely to search for axion-like dark matter”, says Peter Geltenbort, co-responsible of PF2. “In those experiments we measured the ratio of precession frequencies of the magnetic moments of mercury-199 atoms and of UCNs subjected to electric and magnetic fields, where the mercury, whose EDM is negligible at the level of the neutron EDM limit, served as a co-magnetometer to cancel magnetic field drifts”.

If the gluons and nucleons in the neutrons were interacting with axions during the experiments, the data should reveal harmonic oscillations with frequencies ranging from nano- to millihertz, depending on the axion mass. Owing to the way that the data were collected, the analysis of the ILL data covered oscillation periods of the order of days and longer, whereas the analysis of the PSI data provided information for oscillation periods down to minutes.

For both frequency ranges the search ended with a null result; no signal consistent with the presence of axions was spotted. The lack of oscillation signals allowed the teams to set the first laboratory limits on the interaction strength of axions with gluons, improving those obtained from astrophysical observations of helium-4 by a factor of 1000. They also derived the best limit on the axion-nucleon coupling strength for laboratory-based experiments, notably in an energy range that has so far been unexplored in laboratory experiments.