Visiting ESS, Frederick Bordry of CERN Discusses the Past, Present and Future of the Collaboration

ESS and CERN. The Director for Accelerators and Technology at CERN spent a recent visit to the European Spallation Source getting up to speed on the swiftly advancing project and reinforcing the high-level coordination between the directors of ‘the two leading accelerator projects in Europe’. 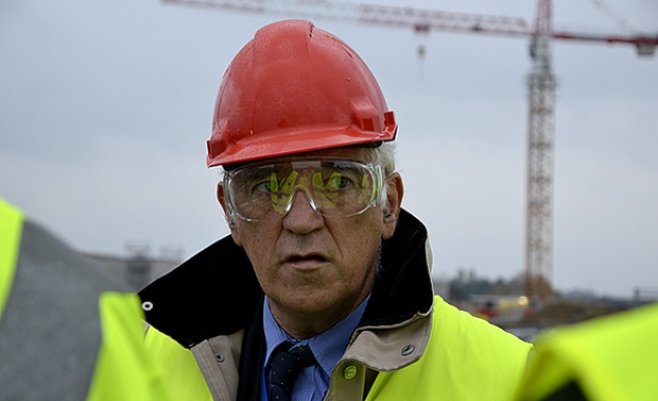 LUND—The Director for Accelerators and Technology at CERN, Frederick Bordry, visited the construction site of the European Spallation Source (ESS) on October 16, his first visit since construction began over a year ago.

“I remember when I came four or three years ago, it was a completely green field!” recalled Bordry. “I was not expecting the work to be so advanced. I was impressed, and I was very happy to walk in the accelerator tunnel and to see this large infrastructure. The project is in good hands and is progressing well. It’s challenging to get medium beam energy in 2019—but such challenges are useful and motivating. I am confident, I think it’s a good start.” 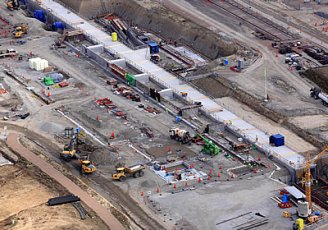 Bordry visited ESS at the invitation of his counterpart at ESS and former colleague at CERN, Roland Garoby, Technical Director at ESS. During his day-long visit, Bordry, in addition to meeting with Garoby, met with ESS Director General Jim Yeck for a project overview and update. In the afternoon, Bordry toured the ESS modulator test facility on the campus of Lund University with ESS Power Converters Section Leader Carlos Martins, also a former CERN colleague.

“It is very challenging to start a facility from a Greenfield,” observed Bordry after visiting the modulator lab. “I can see that especially when you have tests to do, because you have to start by preparing the test facility. At CERN it took us six years to build all test facilities and to complete testing and commissioning. You have a similar challenge.”

ESS and CERN began to collaborate formally as far back as 2008. The technology and solutions developed for CERN’s Superconducting Proton Linac (SPL) were a key resource and model for the Accelerator project when the ESS team was first being assembled. It was Garoby who led the R&D for the SPL at CERN before coming to ESS one year ago. 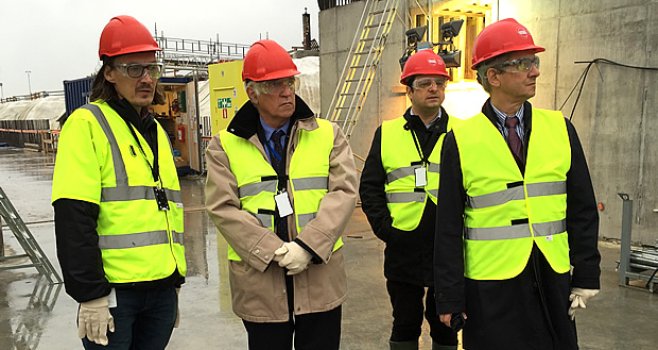 “The competence of CERN people was essential to begin the ESS project and for the initial phase of the Accelerator design,” explains Garoby. “Later on, CERN contributed through collaboration again and also by lending equipment and allowing experts to participate in ESS review committees. This is hopefully not the end. For instance, we know that we will need more manpower at the time of installation and commissioning. The presence of competent and experienced CERN staff during these periods would undoubtedly be a fantastic help for making a success of this facility.”

Bordry reinforced the idea that CERN and ESS, though serving different user communities, have common interests and concerns not only in technology but in project organisation as well.

“For me, a linac is a big circle with a radius of infinity, and I think we are not so far in terms of technology between circular machines and linear machines,” explained Bordry, referring to CERN’s 27-kilometer subterranean circular accelerator, the Large Hadron Collider (LHC). “I consider the two leading proton accelerator projects in Europe nowadays are ESS and, I would say, the LHC [high-luminosity upgrade], where we have to replace 1.2 km in the next 10 years.

“At CERN, we do not try to reinvent the wheel, we rather adapt existing solutions whenever possible,” added Bordry. “The domain of accelerators is a worldwide domain, we have to collaborate.”

Although CERN and ESS both use a member-states governance model, CERN remains a more centralised organisation than ESS. The construction of ESS relies heavily on in-kind contributions in most aspects of the project—particularly in essential science and high technology areas—and this sets it apart from any previous European research infrastructure project. Additionally, the recent reorganisation of ESS as a European Research Infrastructure Consortium, or ERIC, further distinguishes it from the CERN model. Bordry suggests that this novel aspect of ESS is of particular interest to CERN.

“CERN has a long practice of collaboration with multiple partners, and I think [ESS and CERN] have to learn how to work together—definitely with ESS now being an ERIC. It’s not obvious at the beginning. This is true at the level of people working at the site, but also for the mechanisms of collaboration, finance, and so on,” said Bordry. “We can share a lot there. We have some experience, and we are looking at how ESS is doing it. Maybe we can learn also what it means to be an ERIC in Europe.”

Garoby agrees. “ESS has learned a lot from CERN and still needs to rely on CERN, but I am convinced that CERN will also learn from ESS. The ESS approach to in-kind collaboration, for instance, should be very useful for future projects. Moreover, ESS is building the most powerful superconducting proton linac ever built and we think in very competitive economic conditions. So I hope that CERN will profit from this experience to better appreciate the merits of such an option for its future projects.”