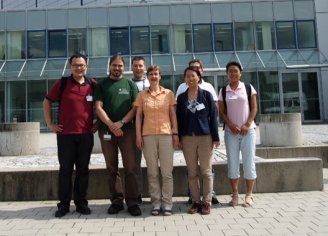 Three-axis spectrometers belong to the most important instruments for neutron scatterers to measure dynamics in solids. The global community of scientists who are in duty of such an instrument is relatively manageable, says Dr. Astrid Schneidewind from MLZ. People know each other, and therefore Chinese scientists were often in Garching for closer cooperation over the years. 2013/14 Dr. Peng Cheng worked on the instrument PANDA develop a concept for a cold three-axis spectrometer, which he now has published together with the MLZ-scientists Dr. Astrid Schneidewind, Dr. Peter Link and Dr. Robert Georgii in the journal Nucl. Instrum. Methods Phys. Res. Sect. A-Accel. Spectrom. Dect. Assoc. Equip. 821, 17.

Since 2011 the China Institute of Atomic Energy (CIAE) operates the China Advanced Research Reactor (CARR) near Beijing, supplying primarily neutrons for materials development. Years ago, the Forschungszentrum Jülich has sold three of its instruments to China, thus securing a share of the available beam time at CARR for German scientists. With the help of the MLZ Chinese scientists already had constructed a thermal spectrometer similar to PUMA for the CARR reactor in the past. Now, the development of their cold three-axis spectrometer was on the wish list.

Peng Cheng is a former graduate student of Prof. Wei Bao, who has returned after 20 years to China. All in all almost one year Peng Cheng spent at the MLZ to be able to optimise different instrument configurations with special software. Type and physical parameters of the most important components such as neutron guides, monochromators, analyzers and polarizing devices run into the simulation and have thus been optimized. Although the simulations are based on the conditions of the CARR reactor, the results are applicable to the development of future three-axis spectrometers and therefore they are also important for the entire community. “To this extent, the MLZ scientists in Garching also benefit very much of this collaboration,” says Peter Link. The instruments PUMA and PANDA are highly sought after by neutron scatterers and overbooked regularly at the MLZ. From this standpoint, very good three-axis spectrometers at CARR reactor in China are of great interest for the global research community. They bring relief because scientists can thus look forward to a shorter waiting period for measuring time at these instruments and thereby the research accelerates.

Experiments on a three-axis spectrometer are used for example for the investigation of spin waves, crystal field excitations, phonons, excitations in low-dimensional systems, quasi-elastic scattering and diffraction of energy analysis. The results often contribute significantly to the exploration of unconventional superconductivity, strongly correlated electron systems, magnetically frustrated systems and magnetism in low-dimensional systems.