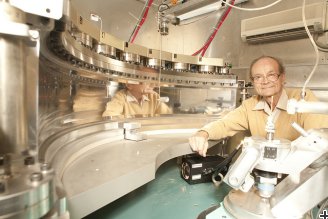 Schoenborn has been called the father of neutron crystallography. Neutron crystallography uses neutron diffraction to elucidate protein structures. When a beam of neutrons hits a crystallized protein, the neutrons are scattered by the crystal and their diffraction pattern is recorded. This approach reveals information about the location of hydrogen atoms, which provides insight for enzyme mechanisms, hydrogen bonding and water structure in macromolecules.

Schoenborn received a doctorate in physics from the University of New South Wales, Australia. Before coming to Los Alamos, he worked at Brookhaven National Laboratory, where he conducted innovative work in macromolecular neutron crystallography, beginning with the very first neutron structure of myoglobin in 1969. He performed his first demonstration of this technique at a time when few scientists believed that it was even possible. Schoenborn persevered and proved that neutron diffraction of macromolecular crystals was not only possible but that the information gleaned was unique and extremely useful. He received an Ernest Orlando Lawrence Award in 1980.

Upon arrival at LANL in 1993, Schoenborn began work on designing and building the first neutron protein crystallography beamline (the Protein Crystallography Station) at a spallation neutron source at LANSCE. Schoenborn, with colleagues Eric Pitcher, Phil Ferguson, and Paul Langan, designed every component of the Protein Crystallography Station to maximize the neutron intensity and reduce background scattering. This achievement enabled scientists to collect excellent data in 15 to 30 days of beam time using small protein crystals. The big payoff was that the larger proteins, for which large crystals are nearly impossible to grow, became amenable to neutron crystallography.

The American Crystallographic Association, Inc. is a nonprofit, scientific organization of over 2,200 members in more than 60 countries. Founded in 1949, the Association promotes interactions among scientists who study the structure of matter at atomic (or near atomic) resolution. These interactions advance experimental and computational aspects of crystallography and diffraction. Understanding the nature of the forces that both control and result from the molecular and atomic arrangements in matter will provide insight into chemical interactions in nature and could lead to treatments for disease.

The Bau Neutron Diffraction Award is given in memory of Professor Robert Bau, University of Southern California (1969-2008) and President of the American Crystallographic Association (2006). Professor Bau made major contributions to the development of the technique of single-crystal neutron diffraction and to its applications in chemical and biomacromolecular crystallography. The award consists of an honorarium and travel reimbursement to accept the award and deliver the award lecture at an ACA annual meeting. Schoenborn is the second recipient of this triennial award.