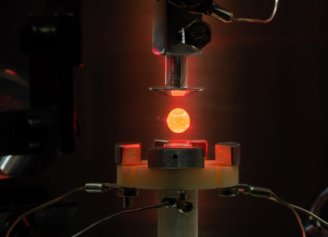 On October 1 a new two-year project will begin, which will serve to study the microscopic structure and dynamics of bulk metallic glasses.

Metallic glasses are a new class of materials with promising properties. They are, for example, much harder and tougher than most metals or steel alloys. Unlike normal metals, they have no crystalline structure, but a completely disordered amorphous structure like glass. Their production, however, is extremely difficult, as the metallic melt has to be cooled very rapidly; otherwise it crystallizes as a normal metal would. This was the reason why, in the past, only very thin shapes or ribbons of up to 2 mm casting thickness were able to be produced and, accordingly, their technological applicability was limited.

Recently, however, scientists have discovered that the minor addition of other alloying elements can dramatically increase the achievable casting thickness to around 5 to 10 mm, even in “simple” alloy systems of only two or three components. The reasons are yet unclear; the new project aims to be the remedy. Dr. Zach Evenson from the Heinz Maier-Leibnitz Centre (MLZ) will examine with the time-of-flight spectrometer TOFTOF at FRM II how these minor additions interact with the nickel and zirconium atoms in a metallic melt and what exactly occurs within picoseconds on the atomic level in the hot mixture. The main components of the metallic glass are nickel, copper and zirconium − aluminum in varying proportions allows for a greater casting thickness and, thus, a completely different shape of the final components.

How done one accurately study a hot metallic sample for which there is no suitable container? All conceivable containers would react with the melt and thus prevent proper investigation. The way out is, in this case, “levitation”: the hot alloy floats as a droplet by means of an electrostatic field without the need to be held by a physical container within in the neutron beam. This method allows very fast heating of the metal mixture with a strong laser and cooling down afterwards. “So we make sure that we really can investigate the actual processes occurring on the atomic level without interference from the outside,” says project manager Zach Evenson.

Neutron scattering is, however, not the only method used by Evenson to reveal the mysteries of metallic glass. He also applies synchrotron X-ray methods, and plans to incorporate simulation and theory techniques to clarify the relationships between the microscopic structure and dynamics and the glass-forming ability. He will work closely with scientists from the University of Dusseldorf and the Institute of Materials Physics in Space at the German Aerospace Center (DLR) in Cologne.