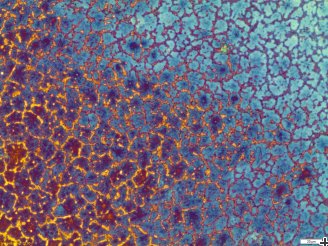 LEU The γ phase of uranium molybdenum guarantees the stability of the fuel under irradiation. | © Ch. Steyer / FRM II

More than 6 million Euros has been invested by the European Commission in the development of new nuclear fuel in the framework of the LEU FOREvER (Fuel for REsEarch Reactors) project. Of this, half a million has been set aside for the developments at FRM II. Project partners include research institutes as well as industry leaders from five countries, with TUM as the only university.

The projects main goal, as the name of the project suggests, is to develop new, lower enriched fuels for European research reactors in order to ensure their operational capability into the future. Only research reactors like FRM II are able to perform important and unique tasks such as the testing of new materials for a wide range of industrial applications, or the irradiation of metals required for the production of semiconductor materials or isotopes for medical purposes. High performance neutron sources (HPRRs) like FRM II, utilize highly enriched Uranium to achieve the highest possible neutron flux. A high neutron flux is a prerequisite for these facilities to fulfill their essential missions not only for industry but for society as a whole.

Considerable efforts are being made around the world to minimize the use of highly enriched uranium in civilian facilities. The FRM II has also committed itself to replace its current fuel with a lower enriched fuel. Together with the other operators of the other European HPRRs, as well as the US Department of Energy’s RERTR program, which is responsible for the conversion of the American HPRRs, a new fuel is being researched for this purpose.

Since the commissioning of the new neutron source in 2004, FRM II has contributed significantly to the research on Uranium Molybdenum alloys (UMo), the most promising candidate for the required high-density fuel. In the 1960’s, UMo was used in commercial nuclear reactors with good results; therefore initially, scientists were optimistic that this fuel could also be used in HPRRs in the near future. However due to the much more severe irradiation conditions in HPRRs, it soon became apparent that the hurdles for the development and qualification of UMo as a fuel, were far higher than originally assumed. This has not only affected the FRM II, but also the operators of more than a dozen HPRRs worldwide. Since 2013, European operators have bundled their resources for the development of UMo within the HERACLES consortium – an effort in which LEU FOREvER has been supported twice by the EU.

In parallel to LEU FOREvER and also within the framework of HORIZON 2020, the HERACLES-CP project has been running since 2015 and the first results of this project can now be utilized in LEU FOREvER. The preferred solution for the conversion is still a Uranium-Molybdenum alloy, either dispersed in an Aluminum matrix or as a monolithic foil. For the unlikely case that the remaining challenges cannot be overcome, there is still plan B. U3Si2 can be used again, but at a lower enrichment and much more tightly packed. This solution will be tested in an irradiation experiment within LEU FOREvER.

The development of a new fuel is a multistep process where learning its irradiation behavior and its scientific explanation are only the first stages. Processes must be developed to allow the new fuel to be manufactured on an industrial scale. For this reason, partners in industry who are specialized in the research and development of nuclear production technologies have been recruited to the project. Their involvement in the early stages ensures that there will be a seamless transition to the manufacturing of the new elements. It will also facilitate and accelerate the conversion process allowing the European research neutron sources to continue to reliably fulfill their important missions.