From Bragg’s law to neutron diffraction

On the occasion of the 150th anniversary of the birth of W. H. Bragg and the 100th anniversary of Bragg’s law, Inês Crespo reviews the reasoning that led W. L. Bragg to his famous equation, setting the foundations for the deployment of neutron diffraction to spur development in fields as varied as computer memory chips, aircraft turbine engines and energy storage devices.

Last July marked the 150th year since the birth of Sir William Henry Bragg, who, in collaboration with his son William Lawrence Bragg, was to found a new branch of science, the analysis of crystal structures using X-rays. The two men were awarded the Nobel Prize in Physics in 1915 for their work, with Lawrence Bragg the youngest-ever Nobel laureate, at the very early age of 25. 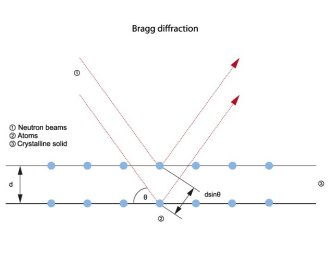 William and Lawrence Bragg were inspired by the work of Max von Laue, who had received the Nobel Prize for Physics for his discovery of X-ray diffraction by crystals. Max von Laue had detected that when the X-ray beam passed through a crystal there was a selection of the angle of diffraction. He suggested that this happened due to certain wavelengths in the X-rays. In studying his work, it occurred to Lawrence Bragg that it would be interesting to tackle the problem from a different perspective, focusing on the crystal structure rather than on the constitution of the X-ray beam. He therefore investigated what would happen if a series of irregular pulses fell on diffracting points arranged on a regular space lattice. A century ago, this work led him to formulate “Bragg’s law”, which is still widely used today. In his Nobel lecture, he explained the reasoning that brought him to formulate the equation:
“The points of a space lattice may be arranged in series of planes, parallel and equidistant from each other. As a pulse passes over each diffracting point, it scatters a wave, and if a number of points are arranged on a plane the diffracted wavelets will combine together to form a reflected wave front, according to the well-known Huygens construction. The pulses reflected by successive planes build up a wave train, which analysis shows to be composed of the wavelengths given by the formula:

In this expression, n is an integer, λ is the wavelength of the X-rays, d the spacing of the planes, and θ the glancing angle at which the X-rays are reflected.” 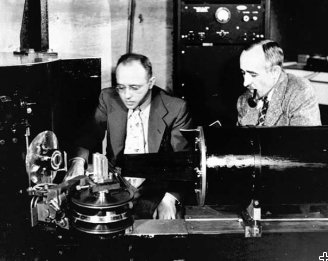 Graphite reactor diffractometer 1950 Wollan and Shull using a diffractometer at the Graphite Reactor in 1950. Courtesy of the Oak Ridge National Laboratory, managed for the U.S. Dept. of Energy by UT-Battelle, LLC

The work of William and Lawrence Bragg provided the basis for current research on neutron diffraction. In fact, the measurement principle of neutron diffraction is based on the Bragg equation.
It was only in 1932, over 10 years after the Braggs’ work on the analysis of crystal structures using X-rays, that James Chadwick proved the existence of neutrons. The advantage of these elementary particles is that they do not need to overcome an electric barrier and are capable of penetrating and splitting the nuclei of even the heaviest elements. However, as Clifford G. Shull explained in his Nobel lecture in 1936, “it seemed unlikely that neutron diffraction would develop as a useful tool because of very low source intensity.” This limitation changed dramatically in 1939-1943 with the discovery of nuclear fission by Otto Hahn and Lise Meitner and Enrico Fermi’s subsequent demonstration of a self-sustaining, neutron chain-reacting assembly. A few years later, in 1946, Shull and Ernest Wollan performed the first neutron diffraction experiments.

Neutron diffraction or elastic neutron scattering is the use of neutron scattering to determine the atomic and/or magnetic structure of a material. The sample is placed within a neutron beam and the angles at which the neutrons are deflected or scattered by the material are recorded to generate a “diffraction pattern”from which structural information can be extracted.

Neutron diffraction is similar to X-ray diffraction, but it provides complementary information and has a number of advantages. For instance, unlike X-rays, due to their weak interaction with matter, neutrons penetrate well beyond the surface of the sample, providing information on the interior of the sample being investigated. However, due to this weak interaction with matter, larger amounts of sample material are necessary.

Neutron diffraction is not limited to studies on the atomic position of light elements, neighbouring elements in the periodic table, and isotopes. Due to their magnetic moment, neutrons can also be used for the determination of the magnetic structure of the sample. Their diffraction can also provide precise data on the mean square displacements of atoms around their average positions, informing on possible static or dynamic disorder.

Across the world, neutron diffraction is supporting research at, for instance:

Neutron diffraction has a myriad of applications. For instance, this technique enables the prediction of properties and behaviours of nanomaterials, offering new insights for the development of devices such as ever smaller computer memory chips; it is widely used in engineering for examining the mechanical behaviour of materials or mapping internal stress, contributing thus to the characterisation of the magnetic properties of advanced materials and the engineering of aircraft turbines. 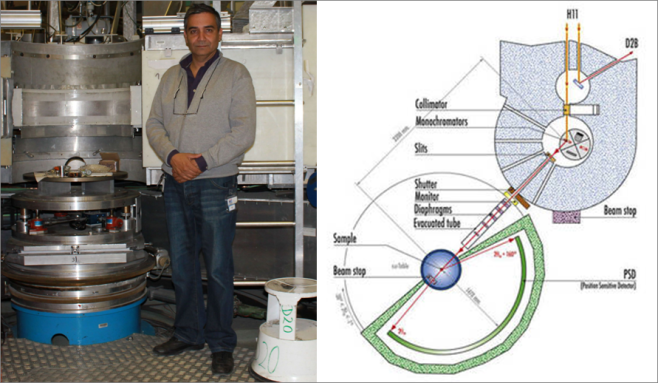 This technique is helping Gabriel Cuello from the ILL determine the structure of liquids and amorphous systems, investigating the kind of atoms that can be found around these systems (e.g. [1]). This information is valuable for defining methods for decontaminating water supplies, for instance.

Martin Meven, who is responsible for the hot single crystal diffractometer HEIDI at FRM II, uses neutron diffraction on this instrument to determine hydrogen bonds in crystalline structures [2], light elements in ionic conductors as potential storage compounds [3] and structural and magnetic phase transitions, e.g. in multiferroics [4] and high-Tc-superconductors [5]. 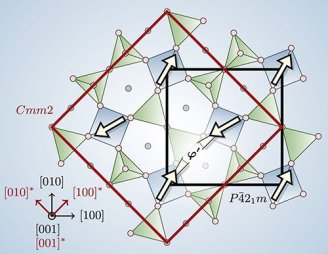 As you can see in our “Scientific highlights” section, neutron diffraction at the HZB has allowed researchers to identify a material providing an excellent testing ground for the physics of dipolar-coupled systems; in fact the spins in this material behave like real bar magnets [6].

At ANSTO in Australia, researchers are using neutron diffraction to examine the potential to improve the shelf life of Li-ion batteries [7]. Lithium battery technology could provide a more durable power source for our electronic devices and for the electric cars of the future.

Superconductors are capable of losslessly transporting large amounts of electric current and could therefore play a key role in power transmission. Neutron diffraction is improving our understanding of superconducting materials and revealing opportunities for improved energy efficiency, a crucial factor in the production of green energy. Experiments carried out at the Swiss Spallation Neutron Source (SINQ) at PSI indicated that superconductors use electron pairing to transport electrical current without resistance [8].
Neutron diffraction also has valuable information to offer to those working on the development of materials for hydrogen storage. Hydrogen is seen as a major mobile energy carrier of the future, for the production of low-carbon-emission vehicles. There are difficult challenges to be met however, to ensure the safe and efficient storage of hydrogen in the carrier device. Research teams at ILL [9,10] and ISIS [11] are tackling this issue by monitoring hydrogenation/dehydrogenation reactions in potential hydrogen storage materials.

What future for neutron diffraction?

Neutron diffraction is now a tried-and tested technique in strong demand by researchers investigating the structure of materials. As Martin Meven points out, “Neutron diffraction is making valuable contributions to several of today’s hot topics, such as the search for new materials to be used for data or energy storage”. The demand for the technique will continue to increase. A new diffractometer is currently being built at the Delft Reactor Institute in the Netherlands to support the Dutch user community “with an easy-access, versatile and competitive neutron diffractometer”. In Japan a new neutron diffraction device was completed last September: ¨SPICA¨ will be used to analyse atomic structures and the behaviour of batteries during their charge cycle.

Neutron diffraction is also being used to develop technologies for electrical energy storage: researchers are investigating the light elements present in compounds suitable for ion exchange systems.
As the technique advances and wider ranges of temperature and pressure are incorporated, the research conditions will improve, opening the doors for new investigations. Researchers need to investigate smaller samples and therefore one of the biggest challenges for the world’s future spallation sources is to increase the neutron flux.