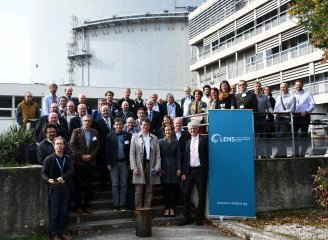 GRENOBLE—The League of advanced European Neutron Sources (LENS) held its second General Assembly at Institut Laue-Langevin (ILL) yesterday, preceded on Tuesday by meetings of its five working groups and the LENS Executive Board. The meetings brought the consortium’s operational working groups together with the leaders of the LENS member facilities to advance priority actions for the organisation in the months to come.

The all-hands meetings allowed the working groups, which are made up of individuals spread across the nine member facilities of LENS, to present their work-in-progress for the first time to the organisation as a whole.

“The meeting was very positive, and highly productive,” said LENS Chair Helmut Schober, who is director of ILL. “We have been able to reach consensus on many open issues and this provides us the basis for moving forward with the promising work that was presented here this week.”

The LENS working groups are exploring everything from funding strategies and user access policies to the collaborative development of new technologies and data management protocols. The overall objective of the work is to foster an effective working relationship among large-scale European neutron science facilities.

“For a new organisation like LENS to be relevant it must promote the interests of all of its members in a coherent and strategic fashion. This week’s meeting has reinforced the operational basis of our collaboration to maintain Europe’s global leadership position in neutron science,” said LENS Vice Chair Robert McGreevy, director of the UK’s ISIS Neutron and Muon Source.

The meeting delegates also heard from Chair of the European Neutron Scattering Association (ENSA) Christiane Alba-Simionesco, who reviewed a number of initiatives being pursued by the organisation. ENSA represents the neutron science user community, and counts 7,000 registered members across 21 European countries.

In her remarks, Alba-Simionesco emphasised that coordination between ENSA and LENS will be an essential component in promoting and strengthening the fundamental role that scientific research with neutrons plays in enabling European research and innovation.

The LENS working groups include participants from all nine founding members of LENS:

LENS is supported by: Brightness2