Bruno Guerard from ILL told us the plan to develop a 3He based MicroStrip Gas Chamber (MSGC) neutron detector with a novel 2D readout. 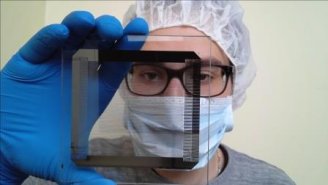 Bruno Guerard is responsible for the Detectors Group at the Institut Laue-Langevin (ILL) in Grenoble, France. He leads task 3 of the SINE2020 Detectors Activity to develop a Helium-3 based MicroStrip Gas Chamber (MSGC) detector with a novel 2D readout. Damien Roulier joined the detector group as a postdoc last January to work on this topic.

Most world-class neutron facilities need ever more efficient, faster neutron detectors for their instruments. Given that each instrument has different features, each requires different types of detectors. After inquiring for specific needs in Europe’s neutron facilities, Guerard put forward the SINE2020 proposal to develop a new MSGC (MicroStrip Gas Chamber) neutron detector.

How to build a better neutron detector? 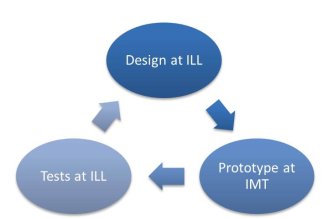 Fast detectors based on neutron conversion in gas, as it is the case in a MSGC, require high electric field in the conversion gap and to segment the detector with independent readout channels. Due to their planar geometry, the 2D localization with a MSGC is more difficult than with MWPCs (Multi-Wires Proportional Chambers). By reading out both ends of the MSGC strips, anode or cathodes with charge division electronics, it is possible to convert the signals into a position, like in a standard Linear Position Sensitive Counter Tube. Former attempts to read the anodes have failed due to the difficulty of controlling the resistance of the anodes. The MSGC developed in SINE2020 will be based on the cathode readout, which is intrinsically more flexible. One issue with this parallel readout is to build a connector with a pitch of typically 1 mm. Another issue is the very high pressure needed for the high spatial resolution. The team’s goal is thus to build a faster, more precise MSGC neutron detector by tackling those issues. Achieving this ambitious goal by the end of the project will take a number of steps and iterations.

The team started by designing the detector at ILL. The company IMT in Zurich has already produced the first prototype of the new MSGC detector and delivered it to the ILL. It will be mounted and tested in a beamline dedicated to neutron detectors at ILL. 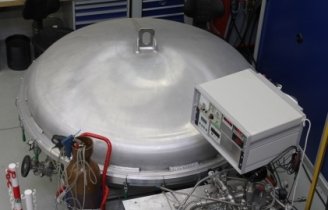 Polarizing the electrodes generates gas amplification on the surface of the MSGC plate, which allows detecting the signal of the neutron. As already said, the position of the neutron is measured along the strips by charge division; for the other coordinate, a centre of gravity algorithm is applied. Several factors contribute to the spatial resolution. The detector needs to operate with high concentration of quenching gas in order to minimize the tracks length of the two particles emitted after the neutron capture. The challenge is that the higher the gas pressure is, the higher the voltage needed, and this might originate some issues such as break-downs or sparks. Furthermore, high pressure of Helium-3 will be necessary to reach high efficiency. The dimensions of the high-pressure vessel need thus to be calculated to minimize the thickness of the entrance window in order to prevent absorption and scattering of neutrons.

After running some tests, the team will optimize the design and send a new version to IMT to produce a second prototype. A series of iterations will follow until achieving the optimal MSGC detector. Each cycle lasts about 9 – 12 months. 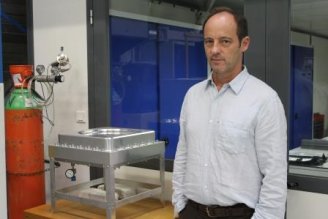 According to Guerard, SINE2020 is an important opportunity for collaboration as well as to receive fundamental funds for technical developments. As he told us, “The fact that we have meetings to show our work and our progress is really motivating. It is a friendly atmosphere so we can really speak about our difficulties and when we expose our problems there are sometimes really good solutions proposed.“ Collaboration goes beyond his own task. The ILL team supports the work of other partners on scintillation detectors and Resistive Plate Chambers. For instance, members from LIP in Portugal have already been in ILL to test their detector and had a really fruitful discussion.