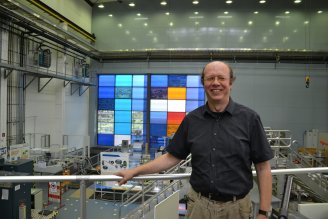 Tennant was honored for the experimental observation of magnetic monopoles using neutron scattering at the Berlin research reactor BER II. He shares the 2012 prize with 5 other scientists “for the prediction and experimental observation of magnetic monopoles in spin ice.” The price is endowed with 12.000 Euro and will be presented at the forthcoming EPS CMD General Conference in Edinburgh on 5th September. It is awarded once every two years for a recent work in the area of physics of condensed matter which, in the opinion of the Society’s selection committee, represents scientific excellence.

Service:
Please watch and hear Alan Tennant in a Video-Interview. He explains,

You can find a script of the interview here. Recordings for broadcasting are available on request.

Background:
Magnetic monopoles are hypothetical particles proposed by physicists that carry a single magnetic pole, either a magnetic North pole or South pole. In the material world this is quite exceptional because magnetic particles are usually observed as dipoles, north and south combined. However there are several theories that predict the existence of monopoles. Among others, in 1931 the physicist Paul Dirac was led by his calculations to the conclusion that magnetic monopoles can exist at the end of tubes – called Dirac strings – that carry magnetic field. Until the scientific papers published by Alan Tennant and his colleagues they have remained undetected.

The material under investigation at the Berlin research reactor was a single crystal of Dysprosium Titanate. This material crystallises in a quite remark-able geometry, the so called pyrochlore-lattice. With the help of neutron scattering Jonathan Morris and Alan Tennant show that the magnetic moments inside the material had reorganised into so called „Spin-Spaghetti“. This name comes from the ordering of the dipoles themselves, such that a network of contorted tubes (Strings) develops, through which magnetic flux is transported. These can be made visible by their interaction with the neutrons which themselves carry a magnetic moment. Thus the neutrons scatter as a reciprocal representation of the Strings.

During the neutron scattering measurements a magnetic field was applied to the crystal by the researchers. With this field they could influence the symmetry and orientation of the strings. Thereby it was possible to reduce the density of the string networks and promote the monopole dissociation. As a result, at temperatures from 0.6 to 2 Kelvin, the strings are visible and have magnetic monopoles at their ends.

The signature of a gas made up by these monopoles has also been observed in heat capacity measured by Bastian Klemke (HZB). Providing further confirmation of the existence of monopoles and showing that they interact in the same way as electric charges.

In this work the researchers, for the first time, attest that monopoles exist as emergent states of matter, i.e. they emerge from special arrangements of dipoles and are completely different from the constituents of the material. However, alongside this fundamental knowledge, Alan Tennant explains the further meaning of the results: „We are writing about new, fundamental properties of matter. These properties are generally valid for materials with the same topology, that is for magnetic moments on the pyrochlore lattice. For the development of new technologies this can have big implications. Above all it signifies the first time fractionalisation in three dimensions is observed.”