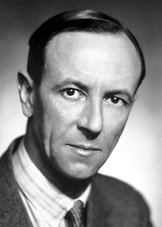 1st June 2012 marks 80 years since Cambridge Physicist James Chadwick’s famous Nobel Prize winning paper, proving the existence of the neutron, was published by the Royal Society. Chadwick’s discovery led to the development of neutron research which has been making breakthroughs across the sciences.

Theories of a neutral particle in the atom date back to the discovery of isotopes of elements with the same charge but slightly different masses around 100 years ago. However, isolating and identifying neutral particles, which are more difficult to manipulate, was out of the scope of scientific instruments until the start of the 1930’s. Chadwick committed himself to proving its existence and he assembled the finest equipment of the day.

His breakthrough moment came from France, where researchers demonstrated what they thought was gamma radiation emanating from beryllium which was able to knock out protons from a surrounding paraffin wax. Chadwick was quick to realise an error in the French researchers’ conclusions. He repeated the experiment in his lab in Cambridge, and, after analysing the tracks of the protons, he proved that it was the elusive neutron that was responsible.

Dr Peter Rowlands from the University of Liverpool and a member of the Institute of Physics’ History of Physics group says: “Chadwick’s discovery completed the picture of the atom. Through extensive experimenting and the quality of the equipment he used he was able to write his name into the history of physics. Chadwick achieved a lot in his career, including leading the UK’s involvement in the Manhattan project; however his discovery of the neutron must rank as his finest achievement, underpinning all future nuclear physics and neutron science techniques.”

Once the existence of the neutron was confirmed, thoughts immediately turned to their applications. Due to their lack of charge, neutrons can penetrate deeply into matter; however their path is not completely clear and their interactions with atomic nuclei deviate them and change their speeds. From these interactions it was believed they could be used to examine the fundamental properties of materials.

Later in 1972, four decades after Chadwick’s discovery, the particles were first being used at the ILL. Today the Institute operates one of the most intense neutron sources in the world, feeding intense beams of neutrons to a suite of 40 high-performance instruments that are constantly upgraded. Some 1500 researchers from over 40 countries visit the ILL each year, including chemists, physicists, biologists, crystallographers, specialists in magnetism and nuclear physics

This year also marks the 40th anniversary of the use of Chadwick’s famous particles at the Institut Laue-Langevin – the flagship centre for neutron science. Professor Andrew Harrison, Director of the Institut Laue-Langevin said: “Thanks to Chadwick’s discovery and the technology developments that have taken place since, the ILL can use neutrons as if they were super x-rays to understand the world at the atomic level and make discoveries that improve our lives. The neutrons we produce and the world leading instruments that detect them are delivering impact in areas as varied as healthcare, the environment and engineering as well as improving our fundamental knowledge of how the world works. “