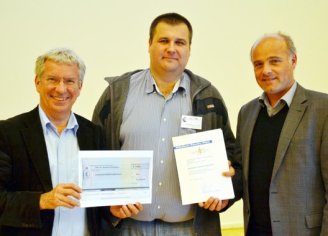 On September 21, in Kiel again a Garching neutron researcher receives the Wolfram Prandl Prize for young scientists in the field of research with neutrons: Dr. Anatoliy Senyshyn. He obtains the prize for his outstanding research in the field of lithium-ion batteries, which he watches in its function in a live hook-up at the atomic level.

Senyshyn has contributed not only with new methods for more precise exploration of lithium batteries; he also shares them generously with the large community of battery researchers. So he developed a method that allows to examine the spatially resolved distribution of lithium in the anode, cathode and the intermediate areas, says Prof. Winfried Petry in the honour of the prize winner. Not only can batteries be investigated with neutrons during their intended use, but also in cases of misuse. For battery researchers this is an experience like they have astronomers when viewed through a strong telescope in clear air. Petry comes up with even more acclamation: “His work has not only revolutionized our knowledge of the functioning of these batteries, they also enable developing new models with much better properties.”

Dr. Anatoliy Senyshyn was born in 1979 in Boryslav, a small town in western Ukraine, and studied physics at the National Polytechnic University of Lviv. There he received his doctorate in 2005 with a theme from the solid state physics, and then moved as a postdoc to the University of Darmstadt. So the way led him 2005 to Garching, because, as a Darmstadt scientist, he took over together with others the responsibility for the powder diffraction spectrometer SPODI at the neutron source.

The Wolfram Prandl Prize by the Komitee für Forschung mit Neutronen was awarded 2002 for the first time for outstanding research with neutrons. Methods’ development and fundamental physics should be explicitly included in the analysis when electing. The prize is funded by the centers HZG, HZB, FRM II, ILL JCNS and equal parts and has been awarded every two years to a candidate without an offered chair and younger than 40 years.