A single-step approach for complex coatings 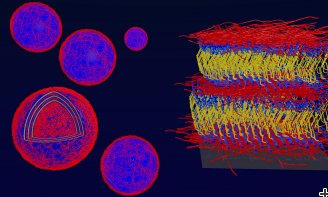 A single-step approach for complex coatings

Neutron experiments prove that multi-layered functional coatings can be prepared with a simple, single step procedure.

Smart coatings are special films with tailored properties that enable them to sense and respond to changes in their environment, such as pH, humidity, temperature, light or the presence of specific molecules. One specific type of smart coating that shows great potential for use in the biotechnology industry is multi-layered coatings – thin films made from well separated alternating layers of at least two components.

For example, multi-layered coatings can be used for biosensing and biocatalysis. Biomolecular sensors, used to detect toxic substances or specific DNA sequences down to extremely low concentrations, can be made by embedding proteins within bilayers – structures resembling cell membranes. By multiplying the number of membrane layers on the surface, you can increase the number of sensors per unit of surface area and hence increase the sensitivity of the device. However, multi-layered coatings are notoriously difficult to produce in the lab because they have to be built layer by layer, a process that often requires multiple steps.

A team of our scientists at the Institut Laue–Langevin (ILL) and the Technical University of Berlin (TUB) has developed a one-step procedure for the preparation of multi-layered coatings that is much more rapid and simple than existing methods. The team used neutron techniques to demonstrate that their new method works.

“Multi-layered coatings are versatile structures with many uses, from biomedicine to nanotechnology, but preparing them can be a difficult and tedious task. Our new technique is rapid, low-cost, reproducible and highly versatile, allowing films to be prepared with a controlled total thickness, number of layers, and periodicity,” says Dr Leonardo Chiappisi, scientist at the ILL and the TUB. The new method involves a multilayer structure that forms spontaneously in solution, eliminating the need to build it layer by layer.

The team’s new method is quick, simple and cost-effective. First, two components are mixed together – a polysaccharide, simple chains of sugar molecules bonded together, and a fatty acid, a basic constituent of fats – and the mixture is gently shaken until vesicles, particles resembling hollow spheres with a multi-layered shell, are formed. “It takes a few seconds and requires hardly any effort,” says Dr Chiappisi. Then, the vesicles are deposited on the substrate to transfer the multi-layered coating to a surface. Using this method, films can be tailor-made with a specified thickness and number of layers.

The researchers used small-angle neutron scattering and neutron reflectometry to characterise the multi-layered structures at the nanoscale – the scale of a millionth of a millimetre. Using these techniques, they proved that their new preparation method works.

As researchers learn more about the features of multi-layer coatings, the new one-step preparation procedure could be applied to other systems in order to produce tailor-made coatings for a range of different purposes.