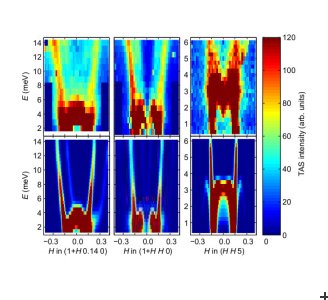 Recently the Solid State Spectroscopy group in Max-Planck Institute (Stuttgart, led by Prof. Bernhard Keimer) published in Physical Review Letters their results of inelastic neutron scattering on stoichiometric Sr3Fe2O7 under collaboration with scientists at PANDA and PUMA. The research paper shows a good example of where experiments both at PANDA and PUMA equally contribute to a common research.

The bilayer pervoskite Sr3Fe2O7, which shows a spiral arrangement of spins below 115 K and a metal-insulator transition at 340 K, is a subject for long-standing theoretical debates about its origin of noncollinear magnetic order. One scenario is a competition between superexchange (antiferromagnetic) interaction and double-exchange (ferromagnetic) interaction, which can lead to the formation of spiral magnetism. The other theory predicts that a sole double-exchange interaction can stabilize a spiral state of magnetic order. To clarify this issue, one needs to map out spin-wave dispersion in the order state, then extract precise values of spin-spin interaction using a plausible model for given spectrum. Since the spin-wave dispersion in the transition-metal oxide Sr3Fe2O7 spans from very low (close to zero) to a few tens of milli-electron volts (meV), several experiments have been done at PANDA for low-energy (0 – 6 meV) and PUMA for high-energy (3 – 16 meV) ranges to clearly show full spin-excitation spectrum (see the figure). By modelling the obtained magnon dispersion, authors have proven that the sizes of superexchange and double-exchange interaction is quite comparable, which confirms a decades-old theoretical prediction of competing exchange interactions near a boundary of metal-insulator transition in Sr3Fe2O7. In addition, such clean inelastic neutron scattering data could also be served as a model spectrum hosting magnetically disordered systems, where multiple exchange interactions are competing in a similar scale. Without combining strength of PANDA and PUMA spectrometers, it would not be possible to describe spin dynamics in Sr3Fe2O7 at such quantitative level.

In spite of sharing the same technique for inelastic neutron scattering measurement at PANDA (cold neutron) and PUMA (thermal neutron), these three-ax spectrometers differ in area of energy and momentum transfer they can cover. Thus, a subject of study at each spectrometer usually varies depending on a characteristic energy scale in given systems, for instance, frustrated magnets at PANDA or high-Tc superconductor at PUMA. Yet, sometimes it requires use of both instruments to cover from low- to high-energy transfer range.