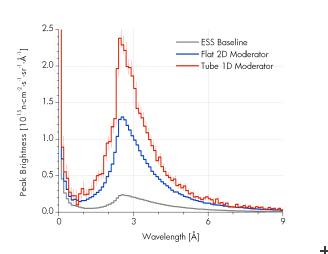 Fig. Substantial gain in brightness is obtained with a flat or tube moderator, with respect to a conventional volume moderator. Examples shown for a 1.5 cm-high flat moderator, and for a tube moderator with 1.5 × 1.5 cm2 section, filled with pure para-H2.

Neutron scattering experiments need beams with high fluxes within the required angular divergence at the samples. By Liouville’s theorem the upper limit of this quantity is determined by the brightness of the neutron emitting moderator, which tells how many neutrons are emitted from a given surface element into a given solid angle around a given direction. The flux on the sample is then determined by the brilliance transfer coefficient, characterizing the efficiency of the beam delivery neutron optical systems such as guides coated by supermirrors.

In design optimization study a team of ESS has discovered that liquid para-hydrogen coupled cold neutron moderators can deliver 3 – 10 times higher neutron brightness at a spallation neutron source if they take the form of a flat, quasi 2-dimensional disc, or a quasi 1-dimensional tube, in contrast to the conventional more voluminous shapes used by now both at spallation and reactor sources reactors.

Low-dimensional moderators are capable of providing unprecedented brightness, as shown in the figure.

The physical reasons for such behavior in low-dimensional moderators are multiple:

This new approach of moderator design is a quite general new opportunity in cold neutron beam production, e.g. it can also be applied to fission reactor based neutron sources with heavy water reflector, such as ILL.