“Aromatic” molecules for water based electronic devices. Findings on Perylene structure open new routes for the design of organic electronics. 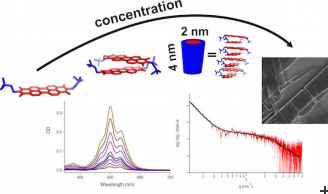 Perylene in water The figure shows the structural transition of Perylene in water upon increasing concentration, ranging from single molecule to highly ordered cylindrical nanocrystals as determined by means of x-ray and neutron scattering.

In the last two decades, organic electronics became one of the most active fields of research in chemistry and materials science. Unlike the conventional inorganic electronics, which is mainly based on silicon and several kinds of metals, organic electronic materials are constructed from small carbon-based molecules specially designed and synthesized for electronic applications. Such molecules are often ring-shaped (cyclic) and contain free moving electrons to ensure sufficient conductivity. The chemists call them “aromatics”. The possibility to create tailor-made molecules for different kinds of applications promises more versatile devices with reduced production cost. Although organic electronics can already be found, such as organic light emitting devices (OLED) in commercial TV displays and smart watches, new molecules for other applications still needs to be designed and synthetized.

The electronic properties of such organic devices not only depend on the compound itself, but also on the structure the molecules form when they are packed together in a material. This so-called super-structure determines how well electrons can be exchanged between the single molecules, to ensure optimal sensitivity, e.g. light-capture applications in solar cells. The team around Max Burian of the group of Heinz Amenitsch from the Graz University of Technology, and Zois Syrgiannis from the University of Trieste, conducted a study on the formation of such superstructures. They used an aromatic Perylene derivative, one of the most commonly used molecules in organic electronics, and dissolved it in water. After dissolution, they used a combination of small-angle X-ray scattering, scanning electron microscopy and small-angle neutron scattering, all available at the Austrian, Czech and Hungarian CERIC Partner Facilities respectively, to determine the super-structure the molecules form. They found out that, when dissolved in water, Perylene first forms dimers of two molecules in low concentrations. It then develops into highly ordered cylindrical nanocrystals at higher concentrations, which, most importantly, loose their ordering when the solution is dried. This important information about the development of Perylene superstructures will help finding good synthesis routes to design organic electronics for many applications.